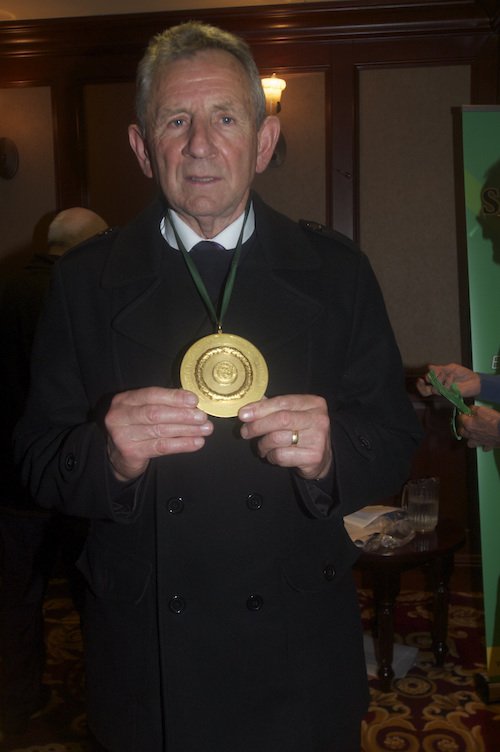 Finn Harps soccer legend Jim Sheridan is to be inducted into the Donegal Sports Star Hall of Fame at the 40th awards function in the Mount Errigal on next Friday night January 29th.

The Rathmullan native’s senior soccer career spanned 16 seasons most of which was spent at his beloved Finn Park. Jim’s honour comes seven years after his late father John was also inducted into the Donegal Sports Star Hall of Fame.

It means another little piece of history will be made as it will be the first time in the history of the awards that a father and son have been recipients of one of the biggest honours in Donegal sport.

It’s the second time that Jim has been a Donegal Sports Star winner but you have to go back 38 years to 1978 when he scooped the soccer award.

A towering centre-half Sheridan was totally dedicated and determined in every game he played. He signed for Finn Harps in 1970 after spending a couple of seasons at St. Patrick’s Athletic. Jim earlier had brief stints at Sligo Rovers and Irish League side Colraine whom he joined after Northern Ireland international Allan Hunter transferred to Ipswich Town.

But, it was with Finn Harps that Sheridan was to become a ‘cult hero’. As a centre-half he feared no one and soccer fans of a certain vintage will remember his aerial strength. When Jim Sheridan came to head clear from a corner or meet a clearance from the opposition goalkeeper on the half-way line he invariably got the ball. He combined his football with a full-time career in the Gardai where again he demonstrated his dedication and determination by rising to the rank of Chief Superintendent in the Sligo District before retiring in 2002.

The biggest influence undoubtedly on his playing career was his late father John who was a legendary figure in Rathmullan organizing and managing teams for many years in the famous ‘Summer Cups’. “My early memories is playing football on the ‘Putting Green’, also down at the beach and over at ‘Deeney’s Corner. Home was a soccer house. Daddy was managing and planning for games. My mother looked after the playing kits. I remember getting to the final of the Ramelton U16 one year where we were beaten by Letterkenny.”

His first taste of competitive senior soccer came in a Summer Cup semi-final in Milford where he replaced the injured Fr. Michael Sweeney. He had a brief spell at Sligo Rovers before coming back to enjoy his first big success as a member of the 1967 Swilly Rovers FAI Junior Cup winning team. The victory came after the final had to be replayed because Swilly’s opponents had fielded an ineligible player. The first match had taken place at the grounds of St. Patrick’s Athletic and the replay was in Dundalk.

Both Pat’s and Dundalk wanted to sign Jim Sheridan following his outstanding performances in those games. He opted for the Dublin outfit on the basis that they were guaranteeing him a first team place right away. In 1969 Jim was approached by Patsy McGowan about signing for Finn Harps who had been given the green light to join the League of Ireland for the first time.

“I had played with Patsy when he was a goalkeeper with Rathmullan and my father also knew him well from those days. I remember as a young lad going with Rathmullan to a cup in Sligo to play Derry Celtic. I hadn’t been in the team and there was place to be filled but dad wasn’t for playing me. Patsy said ‘sure throw the young fella’ in. It went well for me and we won the game. So we had a close relationship from that. I didn’t sign for him that year but joined Harps the following year in 1970.”

In a golden era for League of Ireland soccer Jim Sheridan enjoyed 13 seasons at Finn Park and all but one of those years he was captain. “It was a very competitive league. There were big games nearly every week against the likes of Cork Hibs, Waterford, Shamrock Rovers and Dundalk. We were getting up on 9,000 fans for some of the home matches. Ballybofey was the place to be in those winter Sundays. There was no competition from GAA or other sports and there was no soccer on TV” Jim says.

It was a great Harps side and there was a great bond between the players. “I’m getting the Hall of Fame award but a lot of the credit must go to those players who I depended on. Likewise they depended on me.” Jim Sheridan is very proud of the fact that in the space of 10 years Harps played in the EUFA Cup four times which included games against Aberdeen, Everton, Turkish side Bursapor and Derby County.

“Not many League of Ireland teams have that kind of record in Europe. We were well beaten by Derby but they had a team full of internationals like Roy McFarlane, Colin Todd, Archie Gemhill and Charlie George. I was up against England striker Bob Latchford in the Everton games and also played against Kenny Dalglish when Celtic drew 0-0 with us in a friendly in Ballybofey. It was a great privilege to captain Harps in those games.”

Being in the same side as the great Brendan Bradley, the League of Ireland’s all-time record goalscorer also holds special memories for Jim as does playing against star names like Ray Treacy and Dave Wiggington. The one regret he has is that a really good Finn Harps teams of that era just failed to win the league title finishing runners-up an agonizing three times. Undoubtedly the highlight of his playing career at Finn Park was captaining the one and only Harps side to win the FAI Senior Cup with a 3-1 win over St. Patrick’s Athletic in 1974. “Holding the FAI Cup that day as Finn Harps captain was a huge honour. Looking down on our huge crowd of supporters on Dalymount Park filled me with great pride” Jim said.

He was to play a further nine seasons with the Ballybofey club only hanging up his boots at the age of 38 in 1983 due to a back injury. During almost all of his senior career Sheridan also captained the Republic of Ireland Amateur International soccer side. “Captaining the Irish amateur team was very special for me. I remember we qualified for the European Championship Finals in Athens and only lost controversially 1-0 to Greece which put meant we were out of contention to win the competition. I remember the ‘hairs standing on the back of my neck’ as the National Anthem was being played before that game in Athens. It was a great experience for me personally.”

When time allowed Jim Sheridan also enjoyed playing GAA. In the 1970s he won a Leitrim Intermediate Football Championship medal. And he actually played for Leitrim in a Connacht Senior Championship match against Mayo in 1972. “We were beaten by Mayo that day in Carrick-on-Shannon and I had a penalty saved by the Mayo keeper. After the game supporters were talking about the penalty miss but I always said it was the keeper who saved it.”

After retiring from the League of Ireland Jim played club GAA for some years and he only stopped lining out in the Sligo Junior Soccer League at the age of 46. He continued playing indoor football until he was 66. Through his playing career Jim says the support of his late wife Patricia, who sadly passed away three years, was so important to him.

“Patricia was such a great support to me because I was away so much through football and work. Without that support it just would not have been possible. Sadly his father John also passed in 2011.

It would have been some picture of the first father and son to have won Donegal Sports Star Hall of Fame Awards. Jim has two sons John (42) and Jim (40) who played League of Ireland with both Sligo Rovers and Athlone Town before his senior career was cut short due to injury. His brother Paddy also played for Finn Harps and Sligo Rovers. Jim’s siblings include sisters Mary McKeever (Butlersbridge, Co. Cavan), Bridget McGlynn (Woodlands, Letterkenny) and Bernadette McPhilmey (Letterkenny) and his brothers Josie (Buncrana), Anthony (Derry) and Paddy (Rathmullan). A true sporting legend Jim Sheridan will be a very popular and most deserving recipient of the 2015 Donegal Sports Star Hall of Fame Award.