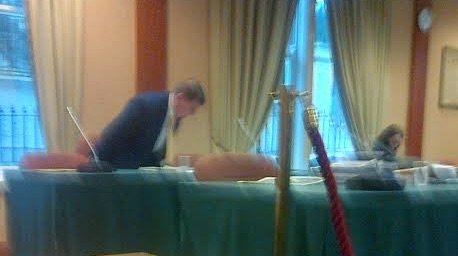 Cllr O’Donnell takes his seat at the council before the meeting starts. Pic twitter

DONEGAL County Councillors have been told today that they cannot expel controversial councillor John O’Donnell from committees on the council.

The council had already ruled they cannot remove him as a council.

Cllr O’Donnell arrived at the January monthly meeting in Lifford today before it started.

He took his seat without talking to councillors. He has been at the centre of a media storm since an RTE programme broadcast on December 7 showed him offering favours to an undercover journalist team in return for payment.

Cllr Frank McBrearty told the chamber that he knew that the council could not remove O’Donnell from his seat as a councillor.

However he said the council did have the power to remove the Kilmacrennan man from council committees.

“We need to send a clear signal to this country that we will not tolerate corruption in Ireland and more specifically here in Donegal,” said Cllr McBrearty.

The motion was seconded by Cllr John Campbell.

However council director Liam Ward said based on legal advice given to the council, councillors did not have power to expel Cllr O’Donnell from committees.

The council has adjourned; if the motion is passed, said Liam Ward, it will not carry any legal weight.