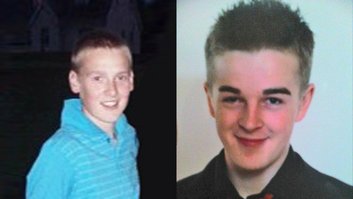 Shaun Graham and Matthew Crawford who were both killed in the crash.

A 25-year-old man has pleaded guilty today to causing the deaths by dangerous driving of two popular friends.

Mr Carr appeared in court in relation to a road accident which claimed the lives of two young men in Rathmullan on August 3, 2013.

Shaun Graham, 19, and Matthew Crawford, 21, from Letterkenny were both killed when the car in which they were passengers crashed on the Rathmullan to Portsalon Road while returning home from a local festival.

Mr Carr spoke just once during the brief hearing today to plead ‘guilty’ to a single charge of causing the deaths of the two young men.

Members of the Graham and Crawford family were in court.

A defence barrister asked for sentencing in the case to be adjourned until April to allow a report from the probation service and to prepare a plea of mitigation.

Judge John O’Hagan, addressing the bereaved families, said he was sure the families were “relieved that someone has put their hands up”.

He said he recognised it was a distressing time for the families and advised them that gardai would assist relatives in preparing victim impact statements for the April hearing.