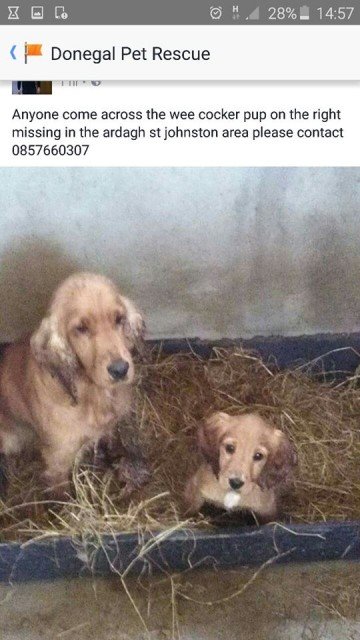 Five-month old Faith (on the right) has been missing since Monday morning.

MISSING: A Donegal family has been left devastated since their five-month old pup ‘Faith’ went missing on Monday morning.

Faith was last seen early that morning in the Ardagh area of St Johnston.

Despite extensive searches of the locality the family were unable to locate Faith.

They launched an appeal for information through Donegal Pet Rescue – but thus far there attempts to find Faith have been unsuccessful.

Owner Des contacted Donegal Daily and asked us to share this post and the photo of Faith in the hope somebody somewhere has seen him – as he’s desperate to get his little pup back home.

The family now fear their gorgeous little Cocker Spaniel puppy has been stolen.

The family are asking Donegal Daily readers to share this post on their timelines in the hope that somebody knows where Faith is.