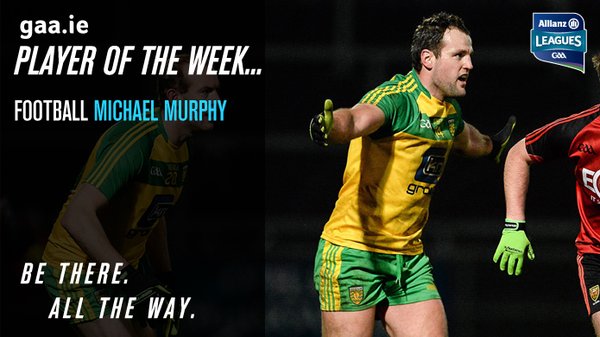 GAA: Michael Murphy’s stunning exhibition of free-taking last Saturday night, against Down in Newry has earned him the GAA Player of the Week award from GAA.ie.

Murphy scored eight superb points and illustrated once again that he is without doubt one of the best players in the country.

His sensational side-line point against Down in the Allianz National League opener went viral earlier this week.

Murphy got the nod ahead of Paddy Andrews who starred in Dublin’s win over Kerry – and Emmet Bradley who starred from Derry.

Murphy got 35% of the votes and was a deserving winner of the award for his superb all-round performance.

Murphy will now look forward to Donegal’s next league clash when they welcome Cork to Fr. Tierney Park, Ballyshannon on Sunday afternoon.

Donegal manager Rory Gallagher will hope Murphy can repeat the trick in what should be a much, much tougher encounter than that of what Donegal faced last Saturday night.

Cork will be buoyed by their excellent win over Mayo last weekend and will head North confident of getting a result.