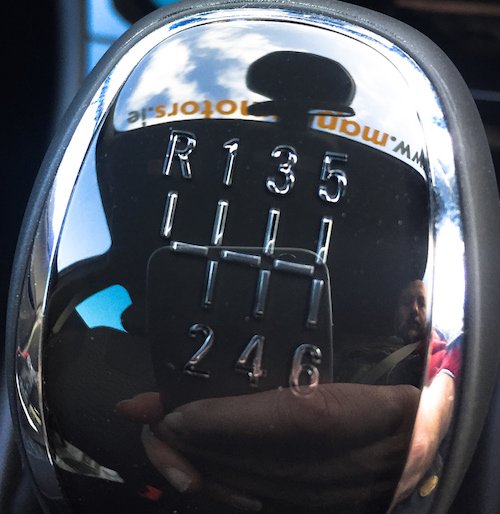 MOTORING: ON THE ROAD AGAIN with BRIAN McDAID

Brian gets into gear to get On The Road Again!

Our motoring man, Brian McDaid, is back on the road again this week. This week he is road-testing the new Opel Astra, driving round Letterkenny three times to get parking and finding it difficult to get a fill of diesel! 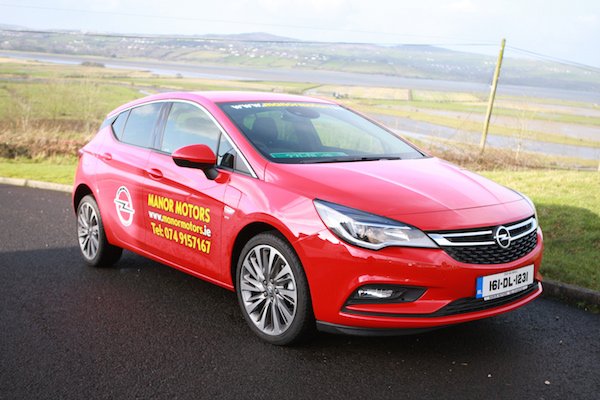 The stylish New Opel Astra SRI which we drove this week pictured over looking the big Isle in Manorcunnigham. Photo Brian McDaid

So on the 4th week into our motoring column, we finally get to road test one of the new cars available on the Irish market.

We took delivery of a new Opel Astra SRI from a new Opel Garage with a new name this week.

Formally Murray Motors in Manorcunningham has now become Manor Motors under the management of John Dillion, son of Colm Dillion. It was sad to see the garage closing recently with John Murray and his family giving such a long service to the motoring public for Opels in Donegal over the years.

So on a positive note it was great to see that Opel’s brand back in the Opel garage again. The Opel Astra replaced the Opel Kadette in the 80’s and over the years it has evolved into a classy 5 door hatchback. Opel’s new generation are very eye catching and their German pedigree shows through.

Prices start at €19,995 exworks for the entry model. The SRi version that I tested had every conceivable extra fitted and would cost in and around €28,000, on the road.

Driving the new Astra it feels a lot bigger inside than the model it replaced, It has a very typical german driving position with plenty of seat adjustment to give plenty of room behind the wheel. Opel fitted high quality bucket seats on the SRI version we drove, which keeps even a big boy like me safely in place going around the roads of Donegal.
This diesel engine is a joy to drive in this SRI, Its had a 1.6 unit fitted developing 136 brake horsepower and matched up to a six speed gearbox its a joy to drive with tons of torque on tap.

The engine is so quiet it’s hard to believe it a diesel. The international trade media named it the whispering diesel, it replace the old 1.7 unit commonly found in all of the Opel range, The new engine claims to get a low as 4.1 litres of diesel per 100kms for urban driving and also qualifies in the A3 emissions brand, this unit will suit the irish market so well.
The Astra was loaded with extras, some I am not so sure about. it has a very advanced tracking device that in the event of a accident will contact Opel who then will contact the driver of the car by phone to see if they are all right, They will have your exact location and if needed will contact the relevant emergency or breakdown services , In theory it’s a brilliant idea but in practice I could not see it if any help. I personally think it’s nice to know if you did get stuck out in the middle of nowhere, chances are in Donegal there will be no phone coverage which will defeat the purpose!

Don’t be STOP STARTING ME.

Drove me around the bend in cars since it was introduced a couple of years ago, maybe because the first of these stop starts fitted would take to much time to make up their mind to switch the engine back on, and I would see me trying to override the system and trying to restart the car myself.

This stop start is brilliant and with this diesel which is so quiet you would hardly hear the car restarting again. I tried to fool this system but it was always ready to go every time. I could live with system no problem and even think I could work with it to get the best economy from your car which is why it was there in the 1st place.
Summing up I think the Astra is probably at the top end of this sector for driving experience , they have a great road presence especially the two door version. They are probably nicer to drive than the benchmark car for this sector the VW Golf, which by the way is my all time favorite especially the GTI version. 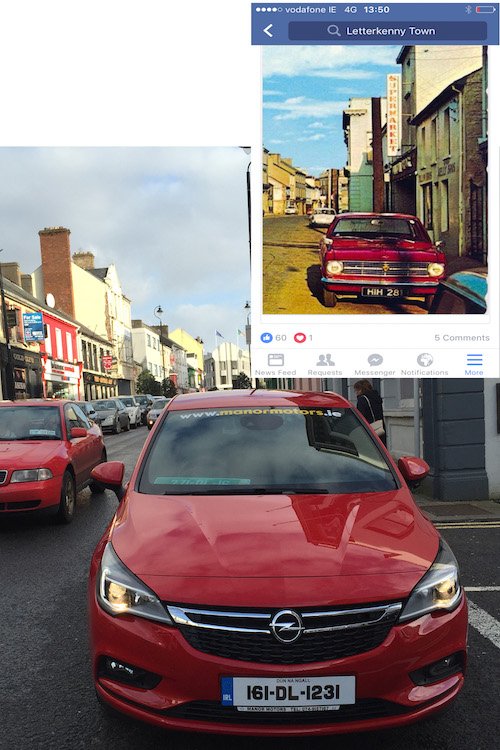 Working on the first test drive proper for Donegal Daily on the Opel Astra, I noticed an old photo appearing on Facebook on the Letterkenny Town page this week.

It was of the Main St. in Letterkenny in 1966, a postcard and in it is a brand new Opel Kaddette, which just happened to belong to my late grandfather Willie Coyle.

He was eighty years of age when he bought his first car, but was a driver all his life, working for Kelly’s Mills, Russell’s Bakery, and Irish Shell. When he retired he was out driving again selling clothes to the customers he sold oil to over the years.

When I received delivery of this the new Opel, I could not help but notice it my grandfather’s Opel and they car I was testing happen to be the same color and same brand.

On my way down they town I could not resist but park in the same spot as my grandfather parked his car 50 years ago in Letterkenny.

Many changes have happened in Letterkenny. For one thing, I had to go around the town three times to get a parking place which he would have no problem back in his day! But it nice to see a the same brand available to me which were available to my grandfather 50 yrs ago. 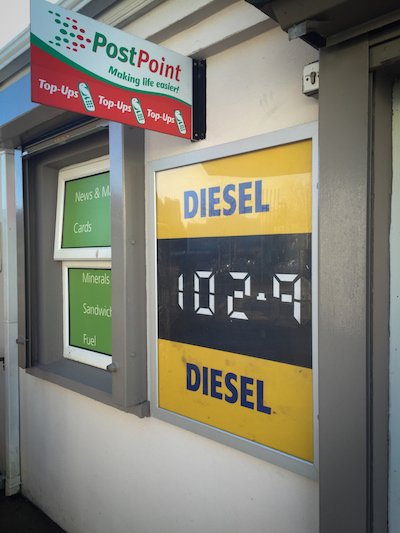 The price of Diesel in Coyles of Raphoe this week.

We were in Raphoe this week and even with the fill-up increasing in price slightly to 103 cent per litre, Coyle’s Filling station in the Diamond was still very busy.

They were that busy that when we called earlier this week they had run out of diesel, such was the demand for bargains and were awaiting another fill up as they prices stay low in Co.Donegal. We will keep you posted on the best deals around the county.

And Finally -The Mini Stages Rally @ The Clanree Hotel
Letterkenny…….. 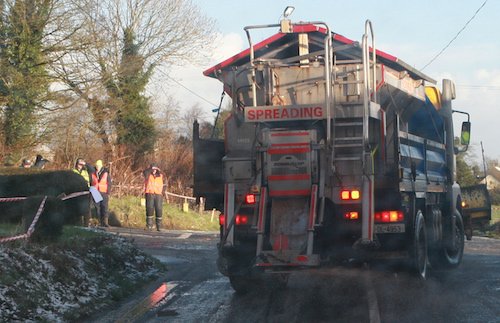 The grittier out to make the road safe for the Minis Stage on Saturday morning. Photo Brian McDaid

The 1st of the closed road rallies got under way at the weekend based at the Clanree Hotel in Letterkenny with two stages completed three times on a very cold Saturday morning. It looked as if the rally was not going to start at all because of the snowfall over night, The first stage was canceled because of a communication problem, The radio car was unable to make it to it pre-arranged location at the top of Mongory Hill. Meanwhile massive efforts was underway to get the snow and slush cleared on stage two. The gritter was the winner of the rally before it started, and was out to plough and grit the surface to make the roads safe for the event to take place.
In the first stages to run, Ballybofey’s Damien Tourish was setting the pace, with Domhail McEleaney, Letterkenny on the notes in their MK2 escort, They were leading both MK2 Escorts of Ryan Loughran and the eventual winner of the event, Cavan’s Jonathan Pringle at the end of the 1st loop, The big favorite, Gary McPhilips crashed out on the stage near Convoy and Donegal’s Joseph McGonagle from Muff was the highest place local driver who nearly managed to get to second place but had to settle for third. Joseph will be happy with his result and will be looking forward to competing in the Galway international Rally this weekend in his Skoda Fabia.

Club Chairman, Brian Brogan finished a fine 4th over all in his beautiful Mk2 Escort with Damien McGettigan on the notes. Damien Gallagher, Letterkenny and John Bonner , Dungloe were the other Donegal finishers in the top 10, Damien Tourish did not finish the event but his time of 8 minutes and 14 seconds in snow and slush on the first stage to run on Saturday morning just show this Donegal Drivers talent, Looking forward to see him in the future. 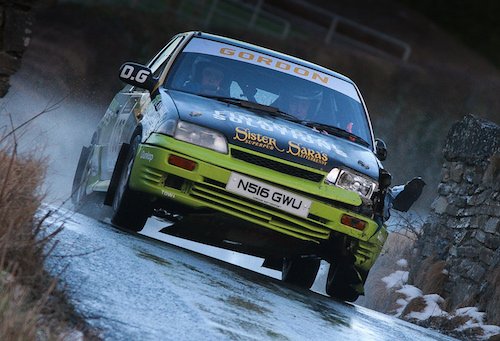 The ragget edge, David Gordan and Keith HArris on their 1st every rally push though the stage with the battle scares to show Photo Brian McDaid

David Gordon and Keith Harris from Letterkenny were out on their 1st event at the weekend seated at the very end of the official starter sheet in car number 105. Unfortunately they clipped the Suzuki Swift on the second stage and managed to get the car into service at the Clanree Hotel where his service got the car fixed up and back on the stage but he did not make it to the end, looking forward to your next rally and its great to see new crew from Donegal getting involved in the event.