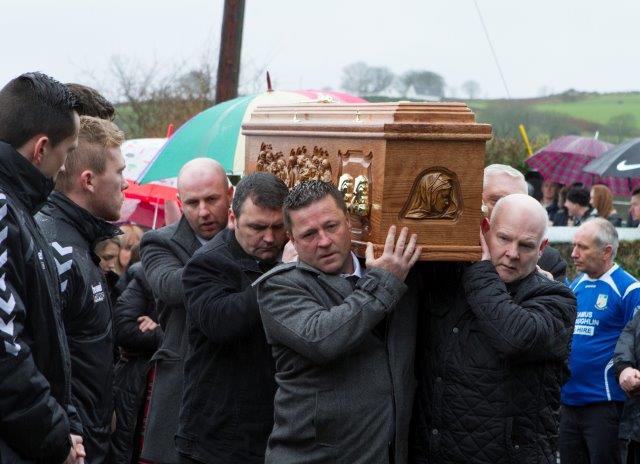 Mark Farren’s remains being carried into St Mary’s Church, Ballybrack for his requiem mass this morning. Pic by North-West Newspix. 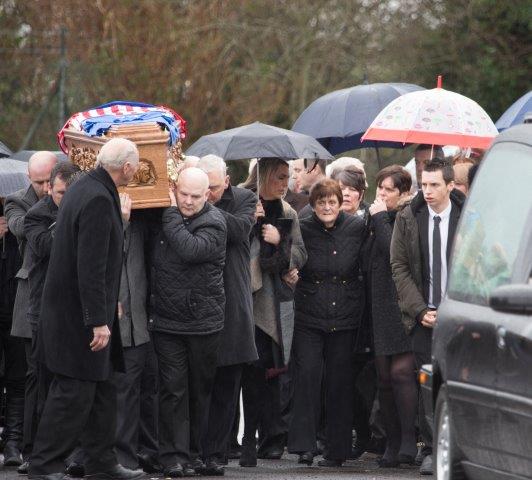 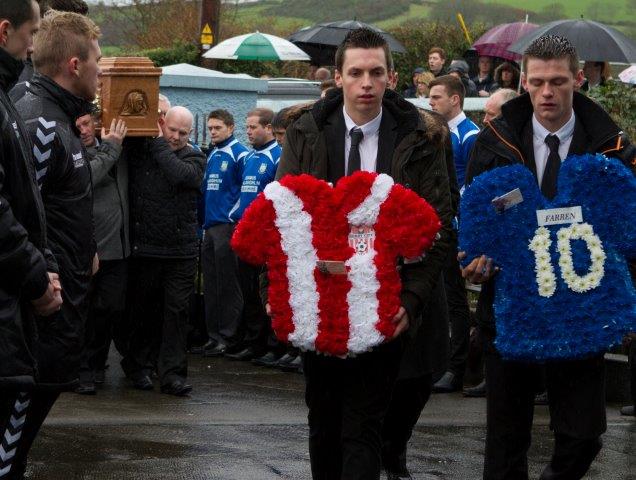 Floral tributes which represent the two clubs he played for with so much distinction Derry City FC and Glenavon FC. 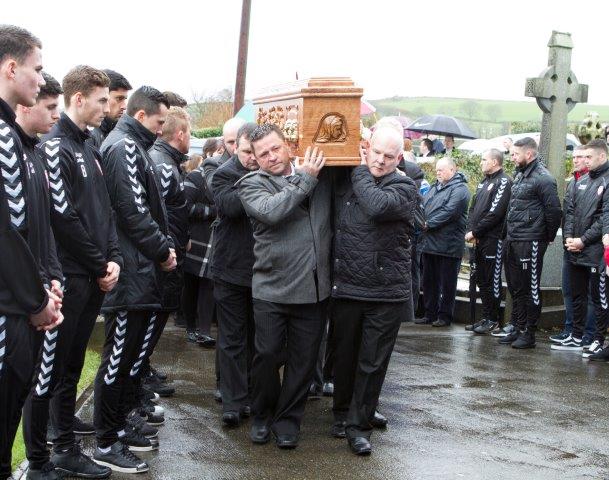 Derry City players form a guard of honour in tribute to one of their greatest ever servants. Pic by North-West Newspix.

There was heartbreaking scenes this morning as one of Derry City’s greatest ever footballers Mark Farren was laid to rest.

The Greencastle native had fought a long battle to beat his illness since his initial diagnosis in 2008 – but he sadly passed away on Wednesday morning aged just 33.

Speaking at the funeral mass this morning at St Mary’s Church, Ballybrack, Moville – Fr. Michael Canny paid a beautiful tribute to a person he described as leaving an indelible mark on the life of many people, particularly those involved with football and Derry City FC in particular.

Fr. Michael Canny said, “In the eight years since his first diagnosis Mark has fought a good fight, assisted by Terri his wife, his family and many really good friends.

“Mark’s short but highly influential life has left an indelible mark on the life of many people, particularly those involved with football and Derry City FC in particular.

“Despite his on the pitch success he was very modest and unassuming. He was never a person to talk up or boast about his achievements. He let his feet and head do the talking.”

Fr. Canny then spoke of Mark’s great love for his wife Terri, and jokingly recalled how former manager Stephen Kenny’s fitness programmes had a big impact on him.

Fr. Canny continued, “Terri tells me that Stephen and his training programme had a big influence on him. She recalls how he would stand in front of the mirror pinching his body to see if he had any excess body fat.

She also recalled how Derry FC always seemed to have a training camp on in February and that her birthday is in February. So thanks to the football training Terri never, in those days, had a birthday celebration with Mark present.

That said, my Brandywell insider, tells me that when Mark met Terri he was a very happy person and that life was complete for him.

“His marriage to Terri in 2009 was a very happy occasion for him. He loved his wife and football and loved the prospects of being a father.

“Unfortunately his time as a father was to be very short because of the death of their triplets Terri, Marlie and Millie.”

Fr. Canny then said that Mark’s passing had left the whole community and his family devastated – but that we should be thankful for all the special memories Mark left us.

Fr. Canny concluded by saying, “Terri for you as his wife as well as his parents Kathleen and Michael, brother and sisters and family circle it is a time to mourn the loss of someone very special in your lives.

“For those of us who could only but admire Mark and his goal scoring skills it is also a time to mourn his passing from this world but also a time of very special memories.

“A time to remember Mark as the young, committed and dedicated striker whom we loved and whose likeness may never come this way again during our lifetime.”