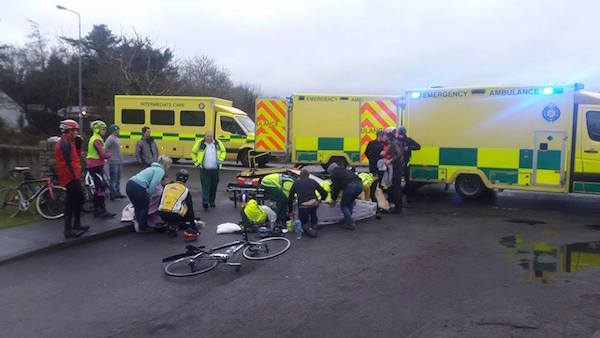 Medics attend to this injured in this morning’s crash which left four local cyclists injured.

Well-known athlete Sean McFadden has relived the terrifying moments he thought four of his fellow cyclists had been killed in a road smash.

In an exclusive interview with Donegal Daily, the Letterkenny man told how his colleagues were propelled more than 75 yards down a road after being struck from behind by a car.

The incident happened around 9am this morning outside the Millbridge Bar in Kilmacrennan.

Sean revealed “I was ahead of the lads and I heard a screech of brakes. I turned around and all I could see was the lads being thrown up into the air and going over the car.

“They were just shunted into the air like rag-dolls and propelled down the road for what must have been seventy five yards or so. 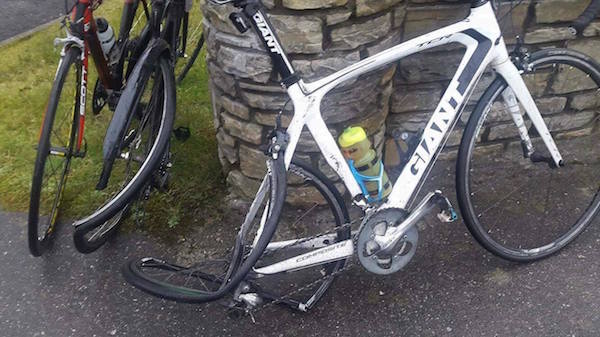 The damage caused to one of the cyclist’s bikes after they were struck by a car.

“How none of those lads were seriously injured or even killed is a miracle. To be honest I’m still not right after it. It’s the worst thing that has ever happened to me in my years of cycling.”

The emergency services rushed to the scene and attended to the lads before they were taken to Letterkenny University Hospital.

Thankfully none of them received serious injuries but are very stiff and sore and were discharged from hospital some hours later.

The driver of the car was also taken to hospital and was interviewed by Gardai as is routine.

The cyclists hurt in the incident include well-known local man Denis (DB) Shiels as well as Mitchell McLaughlin from Drumkeen.

Our pictures show the carnage in the immediate aftermath of the crash which the group have given us permission to use.

The images also show how the group’s bikes have literally been snapped in pieces by the force of the collision. 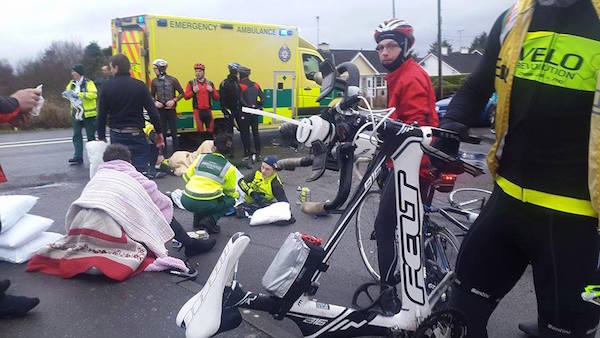 Medics attend to the injured cyclists following the crash.

Sean said he would like to thank the emergency services and hospital staff on behalf of the group for the excellent treatment they received.

But he also revealed how the incident could have been much worse.

“We were out since 8am and had planned to go back into Letterkenny around 10am to meet with some of the other cyclists, the more younger ones including my daughter Shauna.

“I don’t want to even begin to think about what could have happened if they had been involved when the crash happened,” he said.