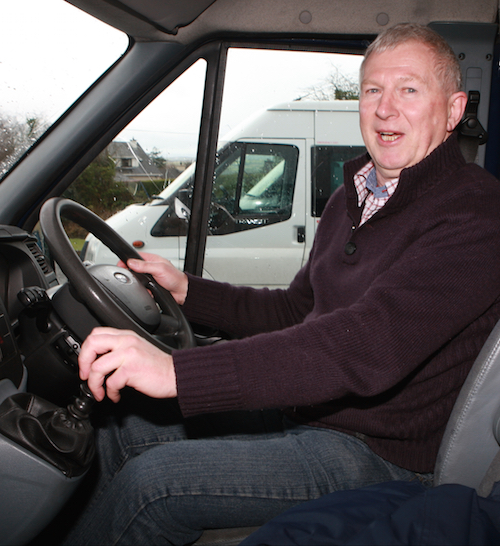 MOTORING: ON THE ROAD AGAIN with BRIAN McDAID

Brian gets into gear to get On The Road Again!

Rallying is in Brian McDaid’s blood. And in his column this week, he catches up with a certified Donegal Rally legend, James Cullen and finds he’s still earning a living behind the wheel!

James Cullen, at the wheel of his Ford Transit minibus, and if his fans have their way they hope to have him behind the wheel of a Mark2 Escort for this years Donegal Rally, 25 years after he 1st win the event. Photo Brian McDaid

For the last five or six weeks a group of fans are recalling his victory on their trip down memory lane. The memory is now becoming a possibility and work is under way to coax the rallying hero back behind the wheel of a rally car for this year’s Donegal Rally.

We caught up with James this week at a Parc Ferme of a different sort at St. Bernadette’s special school in Letterkenny, where his driving skills are used in a different mode.

James works for Jim McGlynn’s Buses as a driver where he collects and delivers the children both from St. Bernadette’s and Little Angels, with a fleet of other bus drivers,

James was approached to see if he would compete in this year’s Donegal Rally, 25 years after he first won the event, It was hoped that he would do the rally it in a Pink Sierra but finding one to rally proved fruitless, Now he hopes to do it in a MK2 Escort like the one he competed on the Donegal Rally in years gone by.

“I know what it is like to try and secure sponsorship for events, I have done it all through my rallying career, and people are great to come on board. It’s very special to feel appreciated twenty five years on. This last couple of weeks, I am receiving calls from everywhere, wondering if this it going ahead or not, but if it is, they would love to be involved,” revealed James.

Sadly James Cullen’s navigator on both wins in Donegal, Ellen Morgan passed away in 2006. So maybe it would be possible to run a pink band around this car in her memory and also help promote cancer awareness,

So to date things are looking good for Cullen for the comeback for a “one off drive” which will celebrate the 25th anniversary of his first outright win, hopefully further developments will work out so an announcement will be made of some of the sponsors that have already expressed an interest, and hopefully it will encourage others to get involved,

A cut away drawing of the original Ford works RS1800 Escort , With a bit of luck and support , double winner of the Donegal Rally, James Cullen will behind the wheel of an Escort for this year’s Donegal Rally.

Ford built the1979 monte spec wide track Escort RS 1800 for their works driver, Russell Brooks. Bertie Fisher then was the first to drive it in Ireland on the 1980 Galway International Rally.

Vincent Bonner was the next the the wheel of the ex Ford Works MK2 and completely rebuilt the car the Donegal International Rally in1983 in which he won with Letterkenny’s Seamus McGettigan on the notes.

James Cullen was the next at the wheel of this very famous car and changed the car to a Donegal registration. A replica of this famous Escort is the memory that they hoped to create for this years Donegal Rally for Cullen,

Our Fuel watch brought us Fanad this week where the diesel is priced at a very competitive 104.9 at Clintons of Tamney located in the centre of the Fanad Peninsula .

Our ‘fuel watch’ brought us to Fanad this week where the diesel was priced at a very competitive 104.9 at Clintons of Tamney located in the centre of the Fanad Peninsula .

Special report from the 2016 Galway Rally

The Galway Rally is Ireland’s Monte Carlo Rally. It’s a winter event and it is also the start of the rallying season. It has no mercy for drivers, navigators and rally fans alike, but that is where we all want to be.

Gary Jennings and Rory Kennedy were on the pace right away and into an early lead, Donegal’s Declan and Brian Boyle were in second in their Ford Fiesta.

Then the big Donegal talking point, Declan Gallagher ,was leading the National Event in his new Subaru, how was he going to do? Declan started very well, putting up very respectable times. On stage 3, for example, Gallagher was second fastest overall to Gary Jennings by just 2 seconds, and was 3 seconds faster than fellow Donegal man Declan Boyle.

That was some pace with a new car for Gallagher who normally drive the rear wheel drive Starlet , but Galway bit back and with in two stages both Boyle in second overall and Gallagher first in the national section were out, just unlucky but both had big off’s It was a massive blow for both these crews at the start of the new season.

On the Road again was in Galway for the 2016 International Rally.

An american travel survey has named Galway as the world’s friendliest city, and sure it’s not a bit wonder.

Isn’t it full of Donegal folk all year round. Most of Donegal’s best go down to Galway as scholars to the GUC and GMIT to develop them old reliables, “the three R’s”.

I only recently found out that the three R’s started out as four R’s in America, Reading Riting, Rithmetic and Religion, but you would have to have faith in that statement to believe in it!
Well on this year’s Galway International rally The Donegal folk who made the pilgrimage to Galway for the rally weren’t talking about the “three R’s” all they were talking about was the “R fives”.

Wise-men and women knew all about the of new R5 classes and stood at crossroads along the route of the rally as they spotted the different rally cars that passed by.

I was unfortunate enough to end up standing beside one of these wise ones, I think he must have ate the rally program for his breakfast that morning.

After the number 1 seed, Gary Jennings and Rory Kennedy blasted through the stage, It all started off, “Thats a WRC” it does not qualify for the championship anymore, then “Thats The R5” thats the new class of rally car. And there is me standing listening to him with an Opel crest watermarked across the side of my face where I fell asleep against the steering wheel waiting for the rally to start.

I would rather listen to the whine of a Quaife sequential gearbox or limited slip differential of a rally car fighting for grip on that wet morning but that sound was drowned by the whine of this one’s voice. The New R5’s is designed to reduce the cost of rallying so hopefully all competitors will have the same level equipment so everyone gets a fair chance.

And finally, what about our Rory?

Letterkenny’s Rory Kennedy on the notes with GAry Jennings as they lead the Galway International Rally on Day 2. Pic B.McDaid

Rory Kennedy notched up his fourth win with 3 different drivers.  At the Galway Rally, 26 years ago he was first with Bertie Fisher then again in 1996 next with Mark Higgins and now this year with Gary Jennings.

This year is unique because himself and Gary are the first outright winners of the event that are not eligible for points in the championship that the event is run in , because of their WRC type car, Only the R5 can score points from here on in.

MOTORING: ON THE ROAD AGAIN with BRIAN McDAID was last modified: February 11th, 2016 by Stephen Maguire