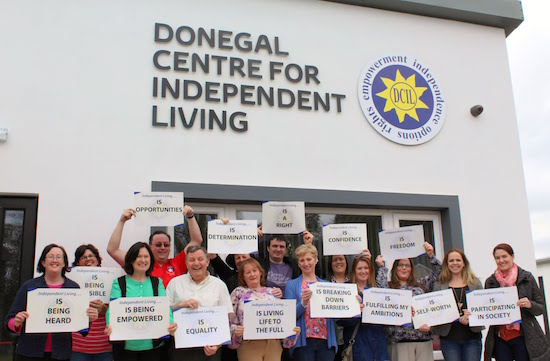 DONEGAL PEOPLE WITH DISABILITIES TO SPEAK OUT BEFORE ELECTION 2016

On the 17th of February 2016, 2 – 4.15pm in the Radisson Blu Hotel, Letterkenny, people with disabilities and their families will have an opportunity to come together and highlight our main priorities for Election 2016.

2015 was a historic year in terms of equality in Ireland, yet today many people with disabilities are still forced to live in inhumane conditions, devoid of any independence or opportunity to integrate into society.

This year we will mark independence throughout this country and we believe that now is the time to secure independence and equal rights for all our Irish citizens.

This public meeting is hosted by the Donegal Centre for Independent Living who work to promote independent living and equality for people with disabilities in Donegal.

Rosaleen Bradley – DCIL General Manager believes that this meeting is vital so that public representatives can fully understand the impact that the severity of cuts in services has made in people’s lives and that there has been no recovery for us to experience here in Donegal.

DCIL alone have experienced cuts of €172,000 per annum which we cannot sustain but we want Wednesday 17th of February to be an opportunity for a wider group of organisations, individuals and their families with disabilities to have their voices heard pre-election.

We are inviting candidates to explain to us what they will do in the forthcoming government to eradicate the inequality of the treatment suffered by people with disabilities at the hands of the state.

Ireland has a poor record in offering protection to people with disabilities and its very failure to ratify the UN Convention on the Rights of Persons with Disabilities is further evidence of the lack of priority given to enshrining our rights in legislation. In August 2012 the government tried to take €10 million out of the Personal Assistance budget, one of the primary services that enable people disabilities to participate in society on a par to everybody else.

Over the past few days we are being told that over 100,000 hours will be taken off the Personal Assistance Budget over the coming year. Without any legislative protection how do people with disabilities attempt to live their lives when the very services required for surviving are continually threatened and cut?

We are calling on all the candidates to clearly and unambiguously explain how they will prioritise and ensure that people with disabilities and their families, which make up well over a quarter of the population are protected by policy and legislation. It is vital that people with disabilities, their supporters, families and friends comes together on the 17th of February to take this opportunity to raise issues in person with our Election Candidates. Take the time to come together and support your fellow citizens as we all did in the Yes Equality Campaign.

By working together we can insist that the systemic discrimination and violation of the lives of people with disabilities ends at the expiration of this government. We will have a number of local celebrity guests present who want to show their support for this campaign and we will also officially launch our DISABLE INEQUALITY Video which highlights a range of different people showing their support for this campaign.

This meeting will run from 2pm to 4pm, in the Radisson Hotel, Letterkenny. All election candidates have been invited to attend. If you would like any further info on the event, please contact Rosaleen Bradley DCIL Manager on 074 9128945 or rosaleendcil@eircom.net