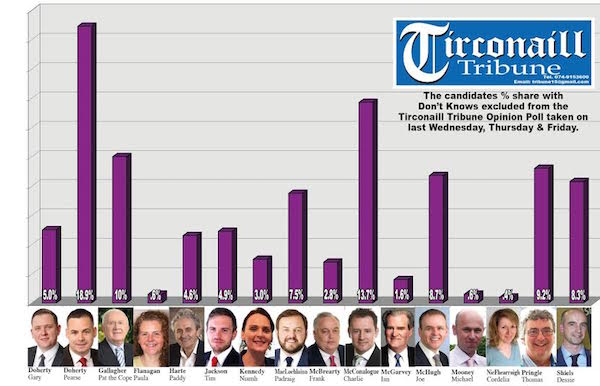 INDEPENDENTS AT ALL-TIME HIGH, FINE GAEL ON A LOW IN TIRCONAILL TRIBUNE POLL

By John McAteer, Editor, Tirconaill Tribune: A new opinion poll by the Tirconaill Tribune two weeks before polling day shows major problems for Fine Gael whose popularity in the county has hit an all time low of 13.3%.

As the outline details of the poll were released earlier in the week, we are told that an emergency invitation has gone out to Enda Kenny to visit the constituency and back up the campaign to retain the seat of Joe McHugh.

Meanwhile the Independents share of the vote is up to 31.5% since last October – an increase of 12% while FF is unchanged with SF holding 31.5% along with the Independents.

The poll of one thousand voters across the five electoral areas was taken over three days last week and the result shows a very undecided electorate. Many of those polled said they will not make up their minds until they enter the polling booth.

Meanwhile the SF vote is also on 31.5% but there seems to a problem with vote management that is impacting strongly on Padraig MacLochlainn’s first preferences.

The big winner in this poll is the Independents group who’ve seen their popularity soar by almost 12% A share of 31.5% is close enough to 25,000 first preference votes.

This represents a massive swing away from the mainstream parties and continues the trend of the 2014 local elections when Independents across Donegal polled close to 22,000 votes.

That figure of 29.8% was a massive breakthrough that yielded ten Council seats.

That popularity has now increased and the momentum has been retained due to many factors: these include Donegal’s huge opposition to water charges and the news of permanent bed closures in the heart of the constituency has seen a major shift away from mainstream politics.

And it is this group numbering around 7,000 voters that holds the key to the destination of the last two seats.

The clear leader is SF’s Pearse Doherty and with a factor of 8.8% of undecided voters excluded he’s running on 18.9% followed by Charlie McConalogue for FF on 13.7% with his colleague, Pat the Cope Gallagher on 10%.

For the Independents, Thomas Pringle (9.2%) and Letterkenny’s Dessie Shiels (8.3%) are attracting much attention and both will be bidding strongly for election.

Doherty is expected to exceed the quota and along with McConalogue looks certain of being returned to the 32nd Dail.

With a projected 117,000 on the electoral registers the traditional turnout should see a poll of close to 78,000 the quota is expected to hit close to 13,000.

While a number of key party spokesmen are warning of a low poll due to a lack of interest, the reality is that Donegal turns out in large numbers for general election with the Milford area being the highest over many elections.

But with so much hanging on preferences into the final counts, this election was always going to be something of a lottery to predict.

As a consequence of the indecision and lethargy the final week of the campaign is going to be one of the most intense ever for all the candidates as they attempt to lift the lethargy that has continued to haunt this campaign since day one.

For Fine Gael, the big shock from this poll is the demise of their vote in Donegal South West where Dinny McGinley continued to hold the seat for 34 years and never failed to get elected. 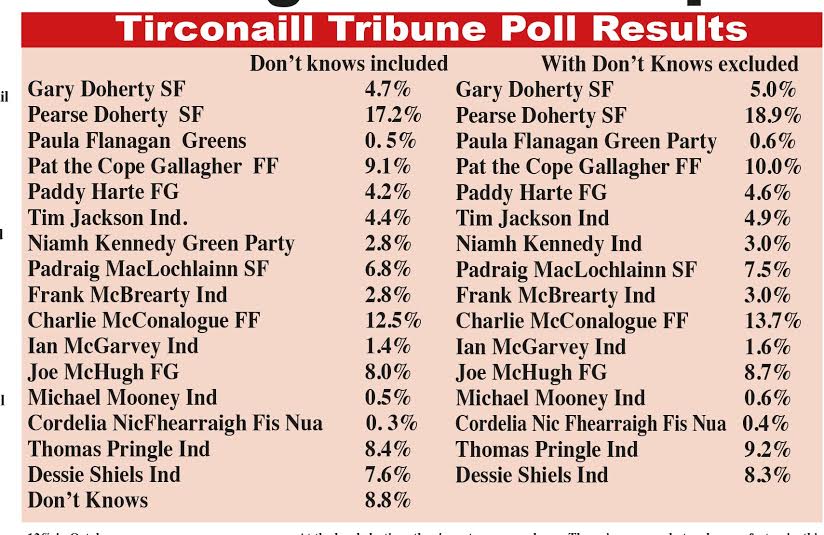