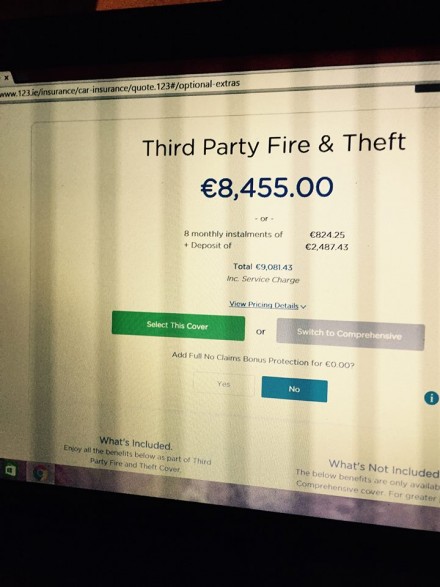 A Donegal driver has received an utterly staggering quote for motor insurance from one of Ireland’s leading insurance companies.

The picture above was sent into us by a young Donegal man who is irate at the cost of insurance in Ireland.

The driver who wishes to remain anonymous, asked us to share this picture to help raise awareness regarding the outrageous hike in motor insurance.

He feels the Government should do more to try eradicate the issues within the insurance industry – that are making it impossible for young drivers to get insured.

He told Donegal Daily. “This is the absolutely ridiculous quote I received today for motor insurance.

“Over €8,000, for one year – third party fire and theft, it’s absolutely unacceptable.

“I’m twenty years of age, I’ve had a full license for two years, and that’s the quote I got.

“I been insured now on my own for a year, and expected the price to drop but it has quadrupled – and I just don’t understand it.

“It’s a joke, and the Government should do more to try and sort out the insurance industry.”