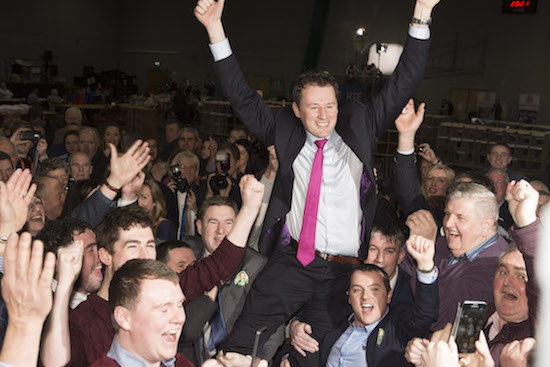 ELECTION 2016: McCONALOGUE TOPS THE POLL TO DELIGHT OF SUPPORTERS!

A jubilliant Charlie McConalogue is raised by supporters after he reclaimed his seat in Donegal. (North West Newspix)

Charlie McConalogue of Fianna Fail has become the first candidate to be elected in the Donegal constituency.

McConalogue topped the poll with a total of 12,533 – almost double his first preference vote of around 6,600 in the last general election.

He surprised many by topping the poll in the five seater, ahead of the heavily favoured Pearse Doherty of Sinn Fein and his own running-mate Pat The Cope Gallagher.

Mr McConalogue said “I am delighted but very humbled by the vote I have received. Our team put in a huge amount of work on the ground and I am just so delighted that this work has paid off.

“We knew that we would have to get over 9,000 or so first preference votes but to get more than 12,000 was just exceptional. I am just so delighted.”

McConalogue was raised aloft by his many supporters as Donegal county registrar Geraldine O’Connor deemed he had exceeded the quota of 12,218