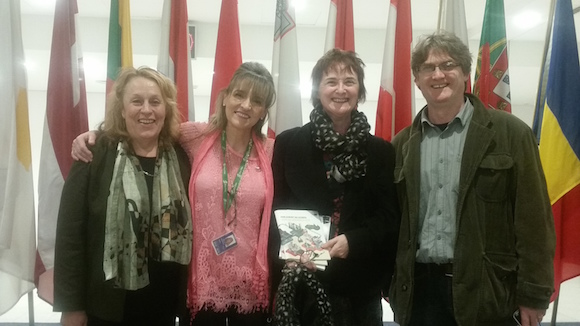 Donegal delegates have join MEO Martina Anderson as part of a delegation to EU Parliament.

The Sinn Féin MEP this week hosted the delegation to the European Parliament focusing on cancer patients’ concerns, needs and rights

Speaking from the European Parliament in Brussels, Ms Anderson said,

“The purpose of this delegation was to focus on patients’ rights, concerns and needs but also to reaffirm our commitment to tackle the cancer epidemic in a coordinated approach across Europe.

“In the north alone, it is estimated that by 2020 – just four years from now – that 74,000 people will be living with cancer. It already accounts for 30% of all deaths across Ireland. Its prevention must be a high public health priority.

“Cancer risk in women continues to rise, and lung cancer has now overtaken colorectal cancer to become the second most common major cancer in women.

“The large, and growing, number of cancer survivors in our community will have major implications for cancer support services in the coming years.”

Noelle Duddy, from Co-operating for Cancer care North West (CCCNW) in Donegal, added “This was a very welcome opportunity to visit the European Parliament. It was very insightful to discover other delegate’s thoughts and experiences of living with cancer and campaigning for increased awareness and services.”