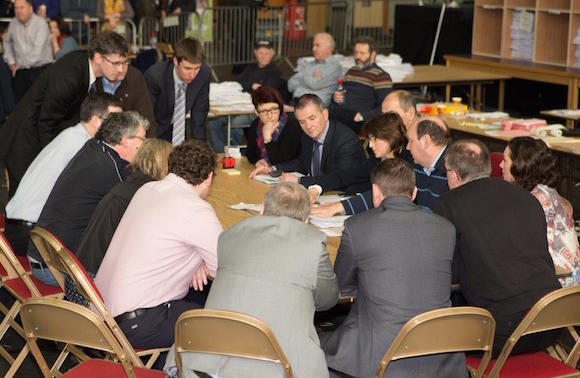 Examining the vote at Aura at the weekend. Pic by Northwest Newspix.

As the country waits for the formation of a new Government the recriminations are well under way in Fine Gael and nothing short of Enda Kenny’s resignation will satisfy their rural TD’s and grassroots members.

And in what has been a very uncertain week in politics, Fianna Fail has laid down the scrapping of water charges as a priority for supporting FG in the formation of the new government.

The proposal to scrap the new water utility is expected to cost €7 billion over the coming five years and if adopted will put the cost of the E-voting machines and the HSE Paypars plan in the shade when it comes to squandering public money.

The irony of that demand has no been lost on the electorate. FF is accused of trying to ride two horses, at the same time by making the abolition of a charge they had originally planned to introduce as a main condition for supporting Enda Kenny’s attempts to form a government.

Here in the new five-seat Donegal constituency the election result saw the Fine Gael vote fall by over 8000 in five years.

The big winners in Donegal were Independents – up by over 8,000 votes and Fianna Fail who gained an extra seat as their first preference vote rose by 7,450 to give them an increase of 9.9% from 2011.

At the same time there will be late night postmortems on how and why Sinn Fein lost Padraig MacLochlainn’s seat despite taking a very strong vote of 27.52%. In any circumstances that vote of 20,148 should have been able to hold two seats.

This saw them unable to muster one quota and junior minister Joe McHugh was finally elected on the 12th count on Sunday evening in Letterkenny.

Along with Pat the Cope Gallagher, they both exceeded the quota on the distribution of Tim Jackson’s transfers.

The FG share of the first preference vote was 15.3% – down by a figure of 10.27% with the nine electoral districts south of Laghey now outside of this constituency.

It was a good election for FF who managed to win back a second seat in Donegal with very strong performances by Charlie McConalogue and Pat the Cope Gallagher.

However the biggest vote catchers were the seven Independent candidates who had a combined first preference vote of 18,653. This was a share of 25.45% and an increase of almost 6% since 2011. The Independents managed to take 18,650 and it was almost inevitable with more than 1.5 quotas they were always in the running for at least one seat…but no more.

It is conceded that there were too many Independents running and they failed to maximise their full potential on the lengthy 16 name ballot paper.

The big winner among the Independent group was outgoing Deputy Thomas Pringle based in Killybegs.

He was supported by two Cllrs: John Campbell and Micheal Cholm MacGiolla Easpuig and their input was highly influential in the Glenties and Donegal areas.

Pringle, Tim Jackson in the Finn Valley and Dessie Shiels based in Letterkenny accumulated over 18.4% of the vote to give them 13,524.

In the enlarged constituency Charlie McConalogue of FF headed the poll on over 17% to give him a surplus of 315. His vote at the last election in Donegal NE was 17.4% with a figure of 6613. This time around he led the field in his native Inishowen taking 8000 votes.

The return of Pat the Cope to the general election field was a big success. He got 13.9% to put him on a first preference of 10,198 and his victory was never in doubt.

He will celebrate his 68th birthday on next Wednesday with a return to the Dail where he was first elected at the 1981 general election.

In a chequered political career Gallagher was appointed Minister of State for Marine and the Gaeltacht in 1987, serving in that post until 1994.

He returned to Donegal politics to successfully contest the 2002 general election and he was appointed Minister of State. In Bertie Ahern‘s Cabinet reshuffle in 2004 he got the portfolio of Minister of State for the Marine. Following a period in this role, Gallagher was moved to the Department of Transport in February 2006 where he served as Minister of State until May 2007.

He was elected as an MEP for the North-West constituency at the 2009 European Parliament election and narrowly lost his seat to Marian Harkin two years ago.

In an election where the people did not give any party a mandate to govern, there are no winners. But FG blew it with double digital losses with a third of their seats now gone. And as Fine Gael openly admits to having lost the election it seems that Enda Kenny continues in his quest to secure the support of Independents in a last ditch effort to cling to power.

The move has been forced on Fine Gael’s leader after several Fianna Fáil TDs said they will not prop up Fine Gael, either as coalition partners or as a minority in government.

Despite many of his leading ministers and TDs acknowledging that Fine Gael had lost the general election, Mr Kenny has signalled his intention to try and form a government and has seemed to leave the door open to negotiations with everyone…. including Sinn Fein!.

Kenny believes that as the leader of the largest party in the 32nd Dáil made up of 158 TDs, he has an obligation to try and form a government.

However, some form of deal with Fianna Fáil is seen as the only credible option for a stable government, which would avoid a second election. But with a lorry load of grandstanding on the horizon any such prospect may be weeks away as both parties try to avoid their clarion statements that they would not go into government together… on any account.

A high-stakes poker game has now begun between the two parties, with Fine Gael saying they do not want to rely on Fianna Fáil support from the opposition benches, where they feel they could be held hostage on policy matters.

Micheal Martin has already set down his parameters for \ the scrapping of water charges and a whole new deal for a beleaguered and cash stricken rural Ireland.
However Martin is already being reminded that on both counts, their previous record in Government is less than exciting given they’ve held the reins of power for over sixty years as emigration soared; vital services including garda stations and post offices were shut down… don’t even mention the health service that was the focus of more plans, promises and projections than the entire NASA programme in America.

The scrappage of water charges is set to cost in the region of €270 million per year in lost revenue to the Exchequer. And with 700 employees in Irish Water they will all be entitled to compensation packages for the loss of their jobs. How a new service with 100 workers will replace the current system is not yet explained.

The issue of water charges are both complex and may not be entirely with the gift of any individual government. In 2000, the European Commission brought in the Water Framework Directive, a strategy to improve water quality and harmonise water management across the EU. Article 9 gave every country until 2010 to: Ensure that water-pricing policies provide adequate incentives for users to use water resources efficiently, and thereby contribute to the environmental objectives of this Directive.

After 9 years without domestic water charges (businesses had been charged and metered since 1998), Finance Minister Brian Lenihan announced in his 2010 Budget speech: “The Renewed Programme [for Government] also contains a commitment to introduce a system of water metering for homes. Preparations are under way. Water charges, when introduced, will be based on consumption above a free allocation.”

It would now prove somewhat of a reverse irony if the FF demand to scrap water charges were to be successful. In effect that would normally be described as a U-turn.

In the 2011 Programme for Government, Fine Gael and Labour committed to the creation of Irish Water, and a “fair funding model” for water, and charging for water usage “above the free allowance.”

And in 2015, the government introduced domestic water charges.

And it was that decision that led to the anger that contributed so much to the collapse of the FG and Labour government last Friday.

Meanwhile senior Fine Gael sources have said they took “encouragement” from comments made by Tánaiste Joan Burton, which suggested Labour would support Enda Kenny’s nomination for Taoiseach when the Dáil convenes on Wednesday.

They are to look to Independents such as the Healy-Raes in Kerry, Denis Naughten in Roscommon, and the two Green TDs to see if a support deal could be struck.