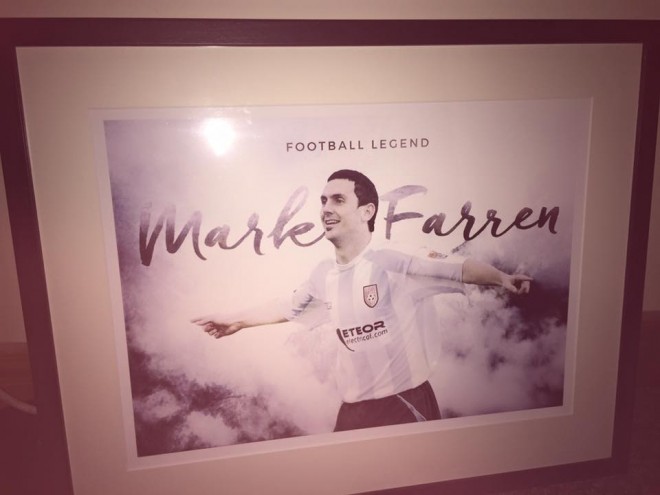 The wife of the late Mark Farren has thanked Finn Harps for the hospitality and incredible support shown to her and her family since the tragic passing of her husband.

Farren was one of the greatest footballers Donegal has ever produced – and the footballing fraternity all over Ireland was left devastated by his sad passing.

Terri-Louise was also presented with a beautiful framed picture of Mark Farren by the club.

She took to Facebook last night to express her gratitude and appreciation to everybody associated with Finn Harps FC.

She wrote, “A big THANK YOU to all at Finn Harps tonight from the staff, players and fans for inviting me up to be guest of honour and presenting me with a lovely framed picture of Mark Farren, it was such a lovely thought from you all, what he wouldn’t have done to be out there tonight

The generosity that’s Harps had shown Mark in his time here between playing and coming to the last number of games was lovely to see – and most importantly Kevin McHugh for being a true friend to Mark over the years.

I appreciate all you have ever done for him and for my treasured gift tonight, so thank you all.

Great result for the team tonight too, well done ⚽