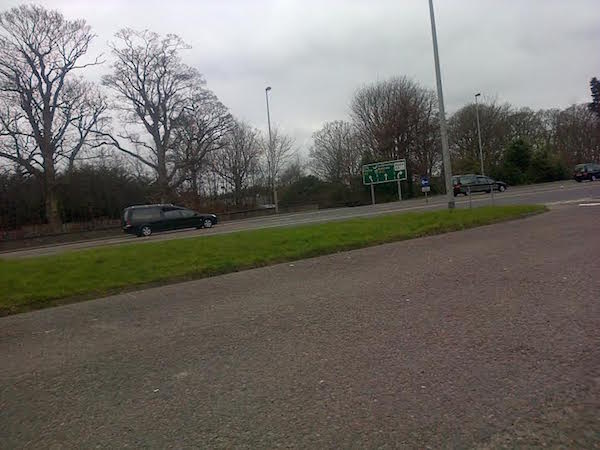 HEARTBREAK AS HEARSES TAKE BUNCRANA VICTIMS TO THEIR HOMES

The hearses carrying the remains of the five victims passes on the Foyle Bridge on its way to Ballymagroarty.

The remains of the five members of the one family who died in Sunday night’s tragedy in Co Donegal have been brought to their homes in Derry this morning.

The tragic people, who drowned when their car went into the water off the pier at Buncrana, were removed from O’Brien’s Funeral Home in Eglinton at 11am and taken to their home at St Eithne’s Park in Ballymagroarty.

The cortege, which contained Sean McGrotty, his two young sons Mark and Evan, Ruth Daniels and her daughter Jodie-Lee, were followed by dozens of cars belonging to family and friends.

People stood at the sides of the roads and bowed their heads as the hearses passed.

Members of the PSNI blocked roads as the cortege made its way over the Foyle Bridge.

The remains were taken to the St Eithne’s Park home which Mr McGrotty shared with his partner Louise James.

The couple’s four month old daughter, who was saved from the sinking car by the heroic actions of passer-by Davitt Walsh, will remain with relatives until after thfuneral.

All five of those who perished in the tragedy will be laid to rest together in the City Cemetery following a 2.00pm service.