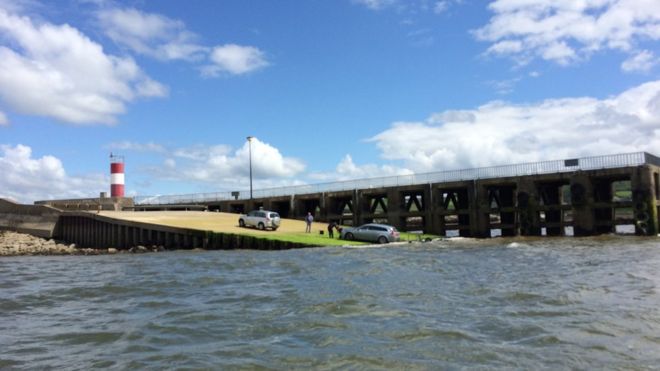 The scene of the rescue last August

A scuba diver has told how his car had to be pulled from Lough Swilly after it slipped off the same slipway where five people died last Sunday.

Greg Hanna told the BBC that last August he was launching a boat into Lough Swilly from the same pier when his car slipped on the algae.

The man who towed Mr Hanna’s vehicle from the water revealed that he too lost his car at the same spot three weeks previously.

“When we got to Lough Swilly, we put on our dry suits and began to reverse the boat on the trailer down the slipway,” said Mr Hanna.

The car was being driven by his friend, as he shouted directions from outside it.

“I asked him to stop when the wheels of the trailer touched the water, which is normal,” he said.

“He stopped, but the car started to slip. It was out of control and just by chance it stopped with the back wheels in the water. It was nearly up to the boot.”

Fortunately the boat had broken free from the trailer, which reduced the weight of the pull and gave the men time to put their diving weight belts under the wheels.

“That helped to slow it down but we still slipped 10 or 11 metres,” said Mr Hanna.

“The trailer was almost submerged. We thought we would lose the car.”

Mr Hanna said the slipway was akin to a skating rink.

“The slime up there is a seaweed algae on the top, but there’s about an inch of sand underneath it, so when the car wheels start spinning on it, it creates a slush that’s lethally slippery as we found out,” he said.

Mr Hanna, an experienced diver of 19 years and the former regional coach of the British Sub-Aqua club in Ireland, explained that the Buncrana pier slipway is unlike conventional harbour slipways that gently slope down to the seabed.

“At the water’s edge there’s a ledge, which is probably designed to prevent the car ferry’s hull hitting the bottom of the slipway.”

On seeing Mr Hanna’s difficulties unfold, a local man came to his aid and towed his car from the water using a 4×4 vehicle.

Following the rescue, the man told Mr Hanna that he had lost his own car in the same way three weeks previously.

The diver said that there were no signs warning of the danger and the barrier that does exist is locked in the upright position against a wall.

Mr Hanna told the BBC: “It’s a wake-up call about the dangers of harbours and piers.Normally they’re good facilities if they’re maintained. If you put soap powder from a washing machine on it, it’ll kill the algae and be washed off.”

He suggested that the pier should be cordoned off if it is not properly maintained and that policies need to be put in place to prevent future tragedies.

The victims of last Sunday’s tragedy were Ruth Daniels, 57, her daughter Jodie Lee Daniels, 14, Sean McGrotty, 46, and his sons Mark, 12, and Evan, eight.

They will be laid to rest today.