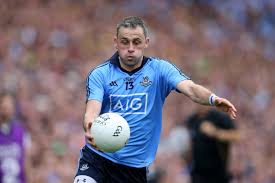 ‘WHAT A LOAD OF CRAP’ – FORMER DUBLIN STAR BLASTS DONEGAL

Former Dublin star Alan Brogan has blasted Donegal for their ultra-defensive set-up against his former teammates tonight at Croke Park.

However, Brogan on his first trip back to see Dublin as a supporter, labelled Donegal’s approach as a ‘load of crap’ and said they’ve ruined his first game back at Croke Park.

He also pointed out that Michael Murphy had barely ventured into the Dublin half during the opening period.

Brogan tweeted, “Donegal are ruining my first trip back.

“What a load of crap – Michael Murphy has hardly got into the Dublin half.”

However, his tweet sparked an angry response from some irate Donegal supporters.

While Noel O’Callaghan tweeted, “You expect them to open up and allow the Dublin procession through?

“Get real. They aren’t there to admire Dublin. Play to win.”

Donegal were well in the game but the big turning point came when Michael Murphy was dismissed during the second-half for a sliding tackle on Brian Fenton.

Dublin kicked on from that point onwards and ran out comfortable winners in the end.

However, some GAA followers on Twitter have said other teams should try and copy Donegal’s approach to playing Dublin, citing it’s effectiveness for large parts of the game.