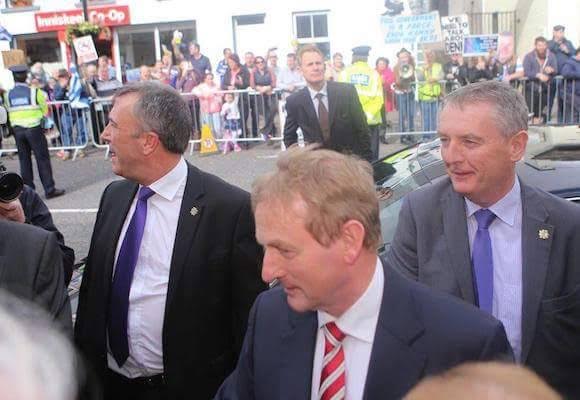 A KILLYBEGS man who jumped over a barrier to shout at Taoiseach Enda Kenny during last year’s MacGill Summer School has been found guilty of using threatening or abuse behaviour.

Painter Jerry Bray, 45, of Church Road, Killybegs had denied a charge of threatening and insulting behaviour on Main Street, Glenties on July 24, last. Bray opted to represent himself in court.

When he was found guilty at Glenties District Court by Judge Paul Kelly Mr Bray said he’d go to jail rather than “be a slave” doing community service.

During the hearing Garda Dermot Gallen said he had been on duty on the day when around 100 people were holding a peaceful protest behind barriers on the street opposite the Highlands Hotel.

At 5pm the Taoiseach Enda Kenny arrived, said the garda, and at this point he saw Jerry Bray leap a barrier and run across the street shouting in a threatening and aggressive manner.

The garda said Bray had shouted ‘scumbag’ twice at the Taoiseach.

He said Bray was “very co-operative” on being arrested for committing an offence under the Public Order Act.

Mr Bray didn’t give evidence under oath in his defence but was able to cross-examine garda witnesses.

Bray claimed that when he put one hand on the Taoiseach’s car “I was attacked by four gardai”.

He went on: “This was political policing at its worst…..Is it a crime to speak the truth in this country whilst the people running it pay for the debts of gamblers.”

Bray said he was wrongfully arrested.

He said he had earlier shouted at Dinny McGinley.

“I shouted ‘you scumbag you sold out the Irish people’ but I wasn’t charged with that,” said Bray.

Bray chose not to give evidence in his defence under oath.

Judge Kelly said he was satisfied by evidence from two garda witnesses and found Bray guilty of the public order offence.

The judge said he was adjourning sentencing for two months to allow the preparation of a community service and probation report.

However Bray interjected, saying he would not do community service.

Judge Kelly however said that would be a decision which Mr Bray could take but he was still going to adjourn the case.

Superintendent Colm Nevin outlined to the court that Bray had 20 previous offences, which included public order, assault and drug offences between 1997 and 2014.

Before leaving court Bray – a recovering heroin addict – handed out photographs from the incident showing his arrest and telling people in court: “Hang on to those as a souvenir.”