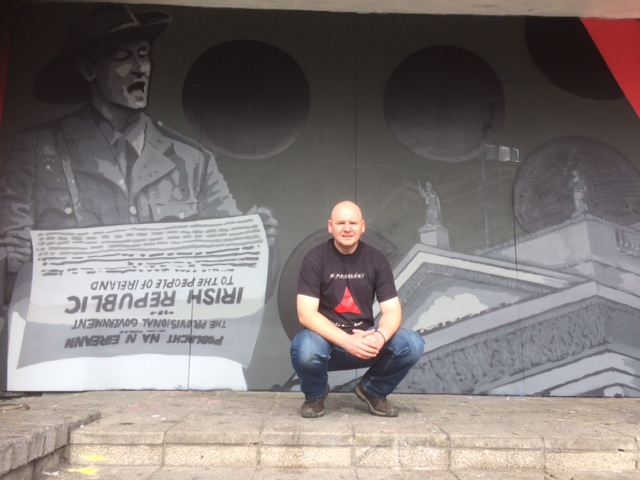 MAC GIOLLA EASBUIG – “ALL THAT HAS CHANGED IN IRELAND SINCE 1916, IS THE COLOUR OF THE FLAG”

POLITICS: Donegal County Councillor Micheál Choilm Mac Giolla Essbuig has said that the socialist ideology fought by James Connolly and others during The Rising has not yet been recognized in Ireland.

According to the councillor all that he feels has changed in Ireland, is the colour of the flag.

Mac Giolla Esbuig has stated that Ireland is still full of economic inequality and was distressed by the site of dozens of homeless people in Smithfield, that he claims were bundled off O’Connell Street to make way for the centenary celebrations.

Mac Giolla Easbuig told Donegal Daily, I marched proudly to the GPO along side other comrades to remember the women and men who fought in the 1916 rising.

“We also pledged our allegiance to the Republic and we where there to show that we as committed Socialist Republicans will continue to organise and to fight for the very same ideals that the women and men of 1916 fought for.

“After the March I made my way down to Smithfield and there you could see that homeless people who were pushed out of O’Connell St so that dignitaries and celebrities could celebrate under the watch of the media.

“Countess Markievicz and James Connolly fought for a socialist Ireland to bring about equality as well as independence.

They fought for a more equal distribution of wealth, for the right of all our children to have a good education and good access to healthcare it seems that all that has changed in Dublin is the colour of the flag.”

MAC GIOLLA EASBUIG – “ALL THAT HAS CHANGED IN IRELAND SINCE 1916, IS THE COLOUR OF THE FLAG” was last modified: March 29th, 2016 by Stephen Maguire
Facebook0Tweet0LinkedIn0Print0
Tags:
1916flagMichael Choilm Mac Giolla EasbuignewsPoliticsRising