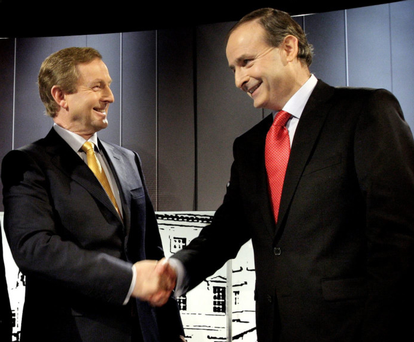 BREAKING NEWS: Enda Kenny has offered Fianna Fáil leader Micheál Martin the opportunity to be part of a full and equal coalition government.

Both men were nominated by their respective parties for the position of Taoiseach, but both nominations were emphatically defeated.

Many Independent TDs and Labour TDs abstained from the voting process earlier this evening.

Political commentators have said both the Fine Gael and Fianna Fáil leaders are now engaged in face-to-face talks for the very first time since the General Election at the end of February.

It is expected that the proposed coalition will also include a number of Independent TDs.

Both leaders have been heavily criticised by those within their own respective parties with many calling for both men to step aside and resign their positions.

Fianna Fáil leader Micheál Martin say his party would never go into government with Fine Gael, but this now looks a distinct possibility as the two continue talks at Lenister House this evening.

Many political commentators have predicted this, as neither party had enough support to form a government on their own.