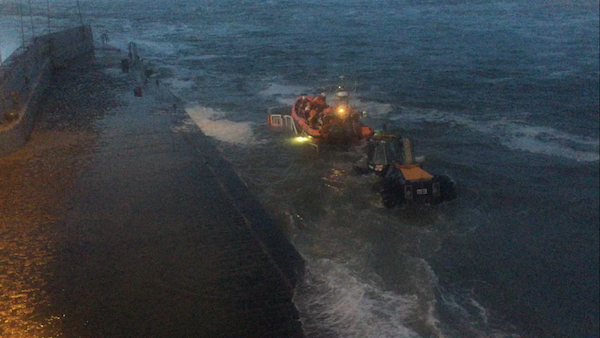 SURFERS rescued by Bundoran lifeboat volunteers are ‘lucky’ that a Coast Guard helicopter was in the area, rescuers have said.

The 118 chopper was returning to Sligo from its involvement in a boat sinking off Burtonport when it was called into help surfers in difficult off Tullaghan beach at 9 O’CLOCK last night.

“The 999 call was made by a member of the public who noticed the surfers struggling to make their way back to shore,” lifeboat station helm Brian Gillespie told Donegal Daily today.

“Within minutes the lifeboat launched in challenging conditions and made its way to the scene where the Sligo based Rescue 118 helicopter, who were returning from another incident, had already lifted one of the surfers out of the water.

“The other surfer was then lifted from the water by the lifeboat.”

The helicopter landed and handed over the surfer they had lifted to RNLI shore crew. Incredibly neither surfer needed medical assistance.

Mr Gillespie warned: “The surfers had luck on their side with the helicopter passing and our boat being able to launch in such challenging conditions.

“The outcome was positive on this occasion and we are thankful we were able to get to the surfers on time. We would like to remind anyone who sees anyone in trouble on the coast to ring 999 or 112 and ask for the Coast Guard.”