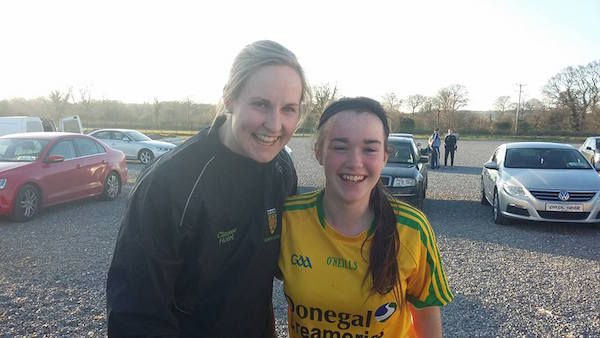 LADIES GAELIC FOOTBALL: THERE were some cracking football matches in the All County U14 girls Championship over the weekend.

The pick of the games was in Division One North & East on Tuesday evening at O’Donnell Park where St Eunan’s overcame Termon.

Mya Alcorn and Ciara McGarvey stood out for the visitors, but the hosts cruised to a comfortable victory in the end with Shannon Cunningham, Caoimhe Kelly, Niamh Walsh and Niamh Harkin in sparkling form.

In the same division Na Dunaibh travelled to Moville and won very comfortably while Milford also had a good away win this evening over N Padraig Muff.

Buncrana were unable to field against Urris in the same division.

A goal decided another game in the division on Sunday – Four Masters 3-06   Mac Cumhaills 2-06 while Aodh Ruadh Ballyshannon had a good win over St Naul’s. Glenfin against Ardara was postponed.

This Saturday’s fixtures in Division One South and East are as follows:

Division 2, North and East has been disrupted by the unfortunate withdrawal of three teams, Robert Emmets, N Colmcille Newtown and Fanad Gaels.

This meant there were no games for Convoy, Red Hughs and Burt.

Round 4 fixtures are disrupted this Saturday with just one game possible:
Burt v Convoy

In Division 2 South and East there were a number of outstanding games.

N Muire’s girls caused something of an upset with a good home win against visitors Glenswilly. Roisin Rodgers was in superb form for the hosts in their 5-07 to 3-09 win.

The battle of the gaeltacht clubs Gaoth Dobhair and Naomh Columba was just that – a battle! Both teams managed eight scores apiece but it was Gaoth Dobhair’s goals which counted as they beat their visitors 4-04 to 3-05, a two point win.

Elsewhere Killybegs hosted the young girls of Termon B and proved too strong in the end for the visitors.

Dungloe v Cloughaneely is this Thursday.