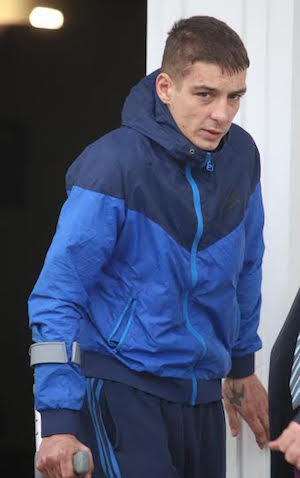 A man home on holiday from America was left with a horrific scar after being slashed in the face after refusing to give a passer-by a cigarette.

Darragh Harvey had to have extensive plastic surgery after being attacked with a knife by stranger Jason Haughey  on April 23rd, 2012.

The court heard how Mr Harvey had returned from the USA where he lives and was on a night out with his father Liam at Gallagher’s Hotel on Letterkenny’s Main Street.

He was approached by Haughey and a young woman and when Mr Harvey refused to give the accused a cigarette, Haughey attacked Mr Harvey before fleeing.

Mr Harvey was rushed to Letterkenny General Hospital and had to later receive plastic surgery.

Haughey was arrested on May 4th in Ballsyhannon but never admitted to the attack.

The court was also told that Haughey was involved in a number of burglaries on February 4th, 2013.

In one burglary he broke into the home of a Mr Pauric Gallen at Glencar Road in Letterkenny.

When Mr Gallen found Haughey in his living room, the court was told he managed to retrain the burglar with a golf club until Garda arrived but was injured during the struggle.

When Gardai tried to restrain Haughey, he took a snooker ball from a nearby snooker table and tried to swallow it.

He was taken to Letterkenny Garda station and continued to resist arrest and had to be pepper sprayed.

When taken to be cleaned up, Haughey, a known drug user of Castlerea Prison, spat blood and saliva at two Gardai.

Judge John O’Hagan said he had dealt with Haughey on a number of occasions and he had given him a number of chances and “tried my best” to rehabilitate him.

“It is absolutely horrific the damage he has done to this young man,” he said.

Judge O’Hagan sentenced him to a total of seven years in jail and suspended the last year on condition that Haughey attend the necessary drug rehabilitation courses.

He backdated the sentence to July 17th, 2015, the date since Haughey has been in custody.