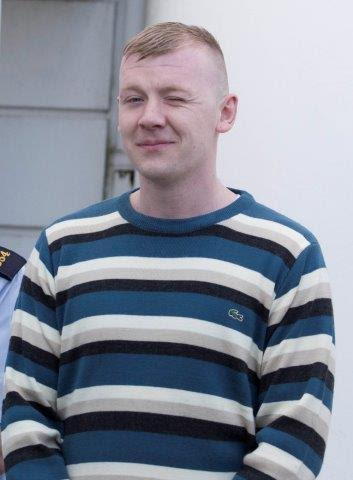 Barry Doherty was sentenced to two years in prison for stabbing Robert Kane.

COURTS: A 25 year-old man from Donegal has been sentenced to two years in prison after a vicious, unprovoked and cowardly assault on a married father of one.

Barry Doherty, currently serving another sentence in prison for a previous assault – appeared at Letterkenny Circuit Court in relation to an incident which occurred in Moville on June 20, 2015.

The court heard how Doherty charged at his victim Robert Kane with a bottle, broke it over his head, and then stabbed him while the pair were lying on the ground.

A statement from Robert Kane was read to the court by Sergeant Forrestal, he told the court, “I was socialising with friends on the night in question, when I noticed three or four males in a row.

“I saw one of his friends involved and intervened to break it up, I was then drawn into a row as a result of trying to intervene.

“However, I opted to walk away from the row, as there were a number of different altercations breaking out around me.

“However, as I walked away from the row, at the corner of my eye I saw a man charge at me with a bottle.

“He broke the bottle over the head of Mr Kane, and both men fell to the ground, the bottle broke, but Mr Doherty then made attempts to slash and stab at me.

“I was s***ing myself, and I was trying frantically to get away, when I got up, it was at that point I think I was stabbed.”

The court then heard how independent witnesses Aoife McDonald and Danny Gillespie verified this version of events.

They both told Gardaí that the attack was aggressive and unprovoked.

Sergeant Forrestal said: “He got a lift home with Aoife McDonald, and he lived about six miles away from where the incident occurred.

“He said he felt he was sweating, and then it was at that point he realised he had been stabbed.

“He was taken to NOWDOC, and then transferred immediately to hospital, he had severe lacerations and required 27 stitches.”

In a harrowing victim impact statement read again by Sergeant Forrestal – Robert Kane said how the events of that night had changed his life forever.

“A few days after the incident, I was out with my girlfriend and my daughter, when I collapsed.

“My life flashed in front of me, and I honestly thought I was a goner, then thought I had a bleed on the brain, but it was delayed concussion from the blow I received on the head.

“I’ll never forget that night, it will never ever leave me, I might never have made it back to my partner and daughter, I’m nervous now that something might happen when I go out.

“I’m conscious of the scars that I’ve been left with, when I go swimming with my daughter I feel like everybody is staring at me.

“Also when I’m lying in bed with my daughter she asks me is my back sore? This makes me angry.

“I didn’t go out to look for trouble, I tried to help a friend, then I walked away from it, and I was left with this scar, I’ll never forget those few seconds when we were both lying on the ground, and he was trying to stab me, he was like a crazed animal.”

The defendant Barry Doherty took the stand and told the court he was profoundly sorry for his actions, and said the incident had been a turning point in his life.

He read out a statement directed at the plaintiff Robert Kane.

Doherty said: “I’d like to let you know how sorry I am for what I’ve done, I’ve no excuses for what I did.

“I had a choice, I should have walked away and I didn’t, I’d like to sincerely apologise to Mr Kane and his family for my reckless and dangerous behaviour.

“I realise the hurt and devastation my behaviour has caused Mr Kane, and this terrible incident has been a turning point in my life.

“I plan on using my time in custody to address the issues I have with alcohol and substance abuse.

“I moved to Ireland when I was 12, and I struggled to fit in, I was subject to severe bullying for years, and then I fell in with the wrong crowd.

“I hate what I’ve become, but I want to turn my life around, and when I’m released from prison I will return to England, to get away from the bad elements that have surrounded me here in Donegal.

“I’d like to again apologise to Mr Kane for the disgusting injuries he received because of my actions, and I’d like to wish him well in the future.”

Judge John O’Hagan told the court: “It’s clear from your probation report that you’ve taken steps to reform your life.

“These are professional people that are used to dealing with these cases, and they all say you’ve got a good side to your character, and that you are genuinely remorseful for what you have done.

“However, this was a very, very serious crime and you’ve a severe history of this type of behaviour.

“I do hope this is a turning point in your life, and I do think you’re genuinely remorseful for what you’ve done.”

Mr Doherty was due to be released on June 1st, 2017, but Judge John O’Hagan sentenced him to a further two years in prison for this attack on Robert Kane.

MAN SENTENCED TO TWO YEARS IN PRISON AFTER STABBING VICTIM AND BOTTLING HIM OVER THE HEAD was last modified: April 29th, 2016 by Mark Forker