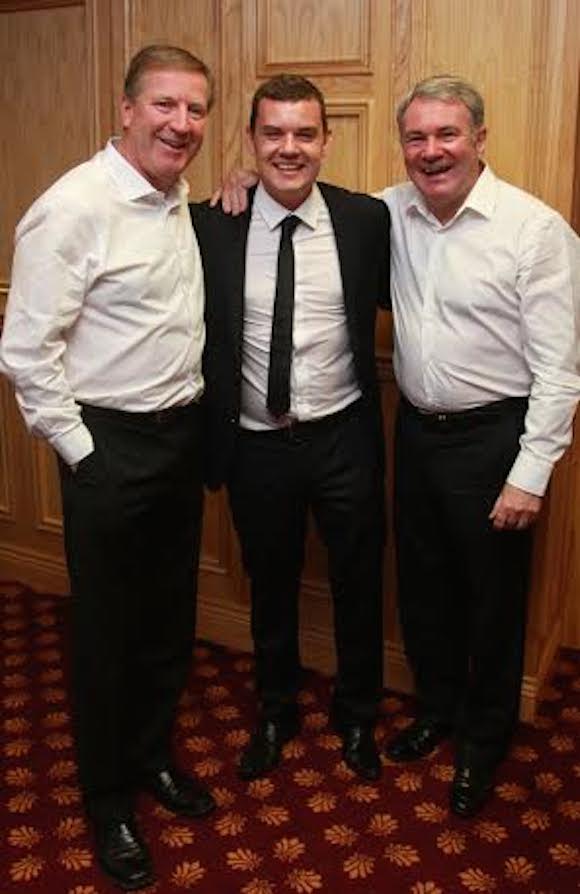 Danny O Carroll ( Buster) with Liverpool and Ireland internationals Ray Houghton and Ronnie Whelan at a previous Charity Christmas Party in aid of a autism unit at Lurgybrack school and the Paediatric Ward at Letterkenny General Hospital. Photo Brian McDaid

MRS Brown’s Boy star Danny O’Carroll has revealed a stunning line-up for his charity golf and dinner day events to raise money for two separate charities – the Buncrana drowning tragedy and suicide prevention in the county.

And Danny has promised there will be even more top names by the time of the golf classic and dinner night on May 20th.

There are two events on May 20th – a charity golf tournament at the famous Rosapenna Links course. Then later that night there is a gala dinner at the Mount Errigal Hotel in Letterkenny.

Danny, who plays Buster in the hit RTE comedy, is raising money for help establish a Pieta House centre in Letterkenny. Half the money raised will go to Pieta House.

The other half will go to Louise James who lost her partner Sean McGrotty, (46), her sons Mark (12) and Evan, eight, as well as her mother Ruth Daniels (59) and her 14-year-old sister Jodi-Lee in Buncrana last month.

Said Danny: “They are two great causes – and we’re going to have two great events to help these causes.

“I am delighted with the line-up so far but I can promise there are a good few more celebrities on my list and I am determined to get more of them in County Donegal on May 20th.

“I would urge people to book their places in the golf – and for the dinner as tickets are selling fast.”

“I’ve never lost anyone to suicide but I’m hearing all the time of tragedies in Donegal and I felt I needed to do something so I began planning a gala dinner so that the charity Pieta House can have a presence in Donegal,” said Danny.

“It takes €1,000 to help each person who goes to the charity so if we can raise €10,000 that’s potentially ten lives saved and as a society we have to do more to prevent suicides.”

“They are two separate causes but I thought with all the celebrities who are going to be in Donegal on May 20 we could get two events up and running.

“It’s going to be a happy day with loads of fun on the golf course and then at night the celebrities will be waiters for the gala dinner and two very worthwhile causes will benefit from it.”

Golf teams of four are being asked to make a donation of €500, with a table of ten at the Mount Errigal gala dinner costing €750.

Tickets are available now by calling the Mount Errigal Hotel but they are going very fast!