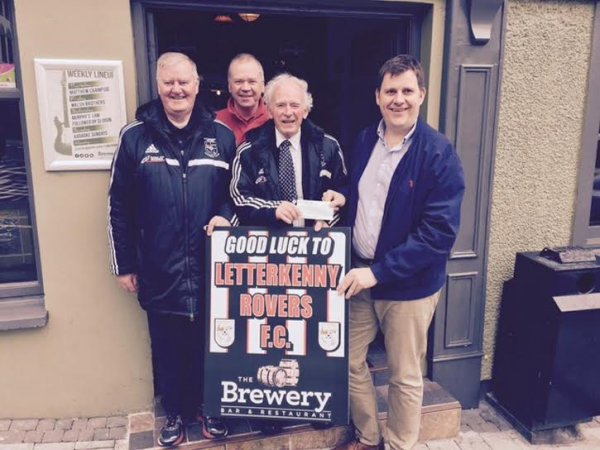 written by Stephen Maguire May 4, 2016
FacebookTweetLinkedInPrint

Enda Nicholls presents a cheque on behalf of Pat ‘The Cope’ Gallagher to Victor Fisher. Included in the picture are Dessie Kelly and Mickey Duffy.

Donegal TD Pat ‘The Cope’ Gallagher has rowed in with his support for Letterkenny Rovers ahead of their historic trip to the Aviva on May 14th.

The game is a historic one for Rovers, as it is their first ever FAI Intermediate Cup final.

In fact, it is the first time ever a side from Donegal will play at the National Stadium.

Their is a buzz about the Cathedral Town, and decorated politician Pat ‘The Cope’ Gallagher has shown his support for Eamon Mc Conigley’s side.

Gallagher has donated €250 towards the expenses for the trip, and the gesture has been greatly appreciated by all at the club.

There is of course a strong connection to the Rosses within this current Letterkenny Rovers side.

Players Mark Forker and Paul Boyle hail from the area, as does former player and current assistant manager Liam O’Donnell.

Gallagher was unable to be there in person to present the cheque this afternoon, but Enda Nicholls stood in on his behalf and presented the cheque to club stalwart Victor Fisher.

Pat ‘The Cope’ Gallagher told Donegal Daily, “It’s a fantastic achievement for Letterkenny Rovers to reach the final, and I want to congratulate all involved in getting this far.

“It will be a great occasion for all involved on May 14th, and I know they’ll do Donegal proud.

“It’s also great to have three members from my own constituency involved in the match, and I want to wish all involved the very best of luck.”

LETTERKENNY ROVERS HOPE THEY CAN ‘COPE’ WITH THE PRESSURE AT THE AVIVA was last modified: May 4th, 2016 by Stephen Maguire
FacebookTweetLinkedInPrint
Tags:
Avivafai cupnewsPat The Cope GallagherPoliticsSport