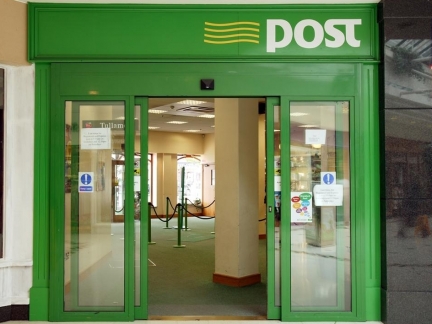 written by John2 May 5, 2016
FacebookTweetLinkedInPrint

POST office managers have slammed organisation changes – saying they are a slap in the face for postal services in Donegal.

A spokesperson for the Postmasters Union says they are not impressed with comments by An Post say there are no immediate plans to move its postal staff from Dunfanaghy, Gortahork and Derrybeg to Falcarragh.

The company is, however, examining the possibility of centralising its mail facilities in North West Donegal at some stage in the future with the former bank premises in Falcarragh deemed an ideal location for such a facility.

And it is this comment that has added to the suspicions locally that West Donegal will soon join the great plan of decentralisation that can only be viewed as a cost saving measure rather than giving the community a locally based choice.

SF’s Cllr John Shéamais Ó Fearraigh said: “This is a step backwards by An Post with regards to Derrybeg post office and the relocating of staff to the sorting office in Falcarragh.

“In the most recent changes, the sorting of mails at Milford, Creeslough, Carrigart and Kerrykeel have been centralised to Letterkenny.

“The Postmasters Union believe this is part of an ongoing plan at An Post to have all mail sorting put into central locations nationally.”

Breid Gallagher has continued to highlight the loss of status at community level: the loss of earnings to those offices involved and the fear that more cuts and cost saving measures are high on the agenda of An Post.

Commenting on the changes, Cllr John Shéamais Ó Fearraigh said: “I have been in contact with An Post concerning this issue, and members of the community here in Gaoth Dobhair have contacted me to express their fears that this development may be a step towards the possible closure of the local office in the future.

“The process of sorting mail has been carried out for many years in Derrybeg. These plans will affect mail personnel also who will now have to travel to and from Falcarragh on a daily basis.

“I am awaiting correspondence from An Post in relation to a number of questions such as what benefit this change will have; what savings will result from these plans or indeed if any extra expense will be incurred. In my opinion, these plans are not in the best interest of the local community and therefore I cannot support the proposed changes.

As another four rural post offices in north Donegal face the loss of their postmen to the Letterkenny sorting office, the move has been described as another disaster for rural areas.

Brid Gallagher of the IPU told the Tirconaill Tribune that these latest proposals by the Government are a kick in the teeth for rural post offices.

Ten postmen are affected as the local mail sorting services are being lost in Creeslough, Kerrykeel, Milford and Carrigart in August.

Local offices already hit by the changes include Ramelton, Kilmacrennan and Rathmullan.

And a union official has said that this is further evidence of the downgrading of rural post offices and the loss of status poses a big risk for their future viability. It is also believed the removal of sorting will also see a substantial reduction in the income of postmasters.

The postmen are to have their mail sorting duties transferred to Letterkenny as An Post moves to ‘consolidate services’. This is part of a cost cutting measure that is coming under increasing criticism from postal workers and the general public.

The move which is well underway across the country will see rural postmasters taking substantial cuts in their income.

“This change is a direct contradiction of what government Ministers and TD’s here in Donegal have been saying in the Dail and we fail to understand how they can support the downgrading of our small rural offices,” said Brid Gallagher of the postal union.

And in another twist the postmasters have been asked to hand out data to pensioners and social welfare recipients asking them to use a financial institution.

The information states, “The Department recommends direct payment to your current, deposit or saving account in a financial institution.

“This is the best payment option for you as you can receive your payment at a time and place that suits you. The postmasters were shocked when asked to circulate this document to their own customers.

A number of areas have already seen their sorting services taken out of the local post office to the nearest main office. And most of the county is now set to go down the same route.

This is the result of ‘unintended consequences’ arising from an agreement between An Post and the Unions, according to post office spokespersons.

The deal is part of the company’s consolidation programme and Donegal is among the last areas to have the deal implemented.

Brid Gallagher said: “Unions agreed the deal in good faith and were not aware of the latest consequences. It was never intended that post offices would lost status and that the postmasters will see a big decrease in their incomes as a result of losing their sorting duties. We fail to see how the Government is allowing this downgrading to go ahead when one the other hand they are claiming their objective was to protect rural offices and services.

“The opposite is the reality.
“This move has been seen as a kick in the teeth for postal workers at a time when many post offices are facing closure.”

She added, “It is a bit of a slap in the face when rural post offices are going through so much turmoil.”