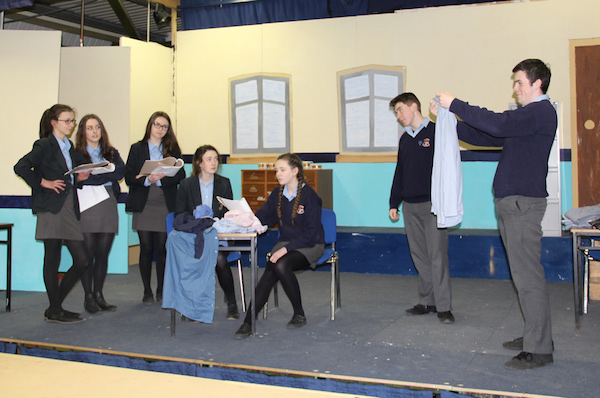 The cast of ‘The Factory Girls’ in rehearsals at Carndonagh Community School.

It’s one of Ireland’s best-loved productions and it’s coming to Inishowen.

Frank McGuinness’s ‘The Factory Girls’ will show in Carndonagh Community School on Thursday, 12th and Friday, 13th May (7.30pm).

The well known and much loved play, set in Co. Donegal, tells the story of five shirt-factory workers whose jobs are on the line.

With their livelihoods under threat, they decide to stage a lock-in. The production is edgy and tense, but also very funny.

The primary theme is resolve in the face of adversity; a drama that exists as a snapshot of working class Ireland in the late 70s and early 80s.