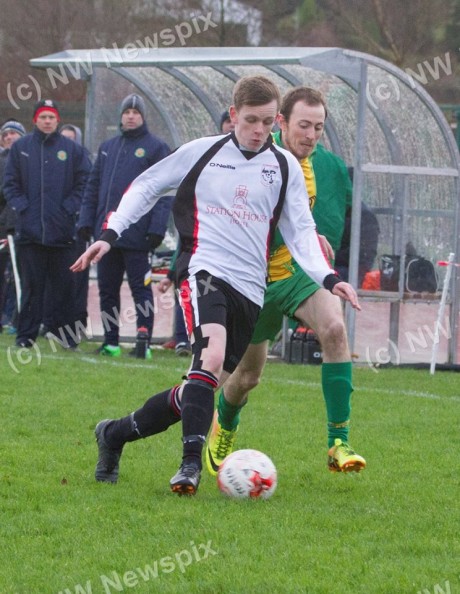 written by Stephen Maguire May 12, 2016
FacebookTweetLinkedInPrint

Ryan Lonergan in action for Rovers.

ROAD TO AVIVA: Letterkenny Rovers player Ryan Lonergan has enjoyed a sensational season at full-back, so much so that he has been nicknamed ‘Cafu’ by his teammates.

Lonergan’s raiding runs down the flank, combined with his defensive solidity have drawn comparisons to the Brazilian legend!

His consistency has ensured he has received glowing plaudits during an already historic campaign for Rovers.

However, the former Glencar underage starlet feels his teammates can go all the way, and believes if they play to the ability their capable of, it could be a dream weekend for all involved with the Cathedral Town club.

Lonergan told Donegal Daily, “It’s been a dream season for everybody, we’ve had a long tough season.

“The lads call me Cafu, but I think I’m more like Philip Lahm to be honest!

“But all those nights getting the legs ran off us on the track at the Community Centre by Liam O’Donnell, will be all worthwhile when we get to run out at The Aviva on Saturday, it really is a dream come true for us.

“We’ve worked so hard all year for this competition, it’s the one we targeted, and to see the buzz it’s generated it’s easy to see why.

“We targeted a run in this competition, and seven games and eight months later we’re in the final at the Aviva.

“We’re operating at the highest level possible for us at Intermediate level, and it’s just amazing to be involved.”

There’s a huge buzz around Letterkenny, the main street has black and white flags draped from top to bottom, and in every shop window there’s good luck signs for Eamon Mc Conigley’s troops.

Lonergan said, “The buzz around the place is unreal, it means so much to so many people, men that have been involved in the club for 54 years, they’re just so happy, and it’s fantastic to see.

“But we want to win it so badly, and we’ll be doing everything we can to make sure we bring that cup back to Letterkenny.”

Rovers have played 9 games in national competitions and will play at least 11 before the season is out, it’s been some run, but Lonergan hopes the best chapter has not yet been written.

“It’s going to be amazing to play at the Aviva on Saturday, but we want to win, and if we do, we’ll make history and it’ll be the greatest day in the club’s history.

“Crumlin are a top-class side, they’ve been there and done it, but hopefully we can do the business on Saturday.”