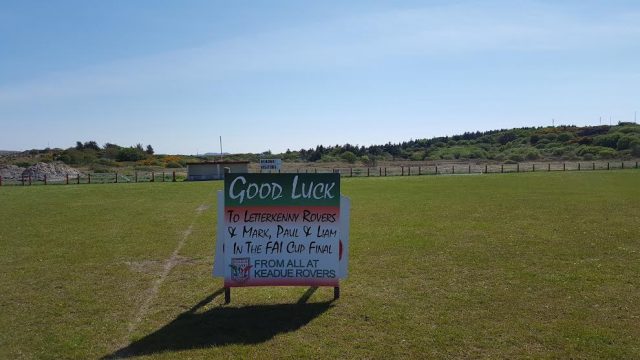 written by Stephen Maguire May 13, 2016
FacebookTweetLinkedInPrint

FOOTBALL: The soccer fraternity in Donegal will be casting a watchful eye on proceedings at the Aviva Stadium tomorrow evening for the FAI Intermediate Cup final between Letterkenny Rovers and Crumlin United FC.

However, one club will have more interest than most.

Liam O’Donnell will man the touchline alongside Eamon Mc Conigley at the Aviva, while Paul ‘The Yank’ Boyle and Mark Forker will be at the spine of the side.

John Francis Doogan told Donegal Daily, “Keadue Rovers have loaned THREE key men to the “wee rovers”  and would like to wish them well for their FAI Intermediate Cup Final on Saturday.

Liam “Keadue” O’Donnell, Mark Forker and Paul ‘The Yank’ Boyle all received their footballing education at our legendary club, and all at Keadue Rovers are excited for them and are hopeful they will join the list of Keadue Rovers players who have won intermediate cups at Fanad United.”!

Indeed it’s exciting times for the Rosses club now with a new pitch about to begin construction.

The club will be launching a 100+ club in the next few weeks and would appreciate all help in fundraising to deliver this fantastic facility to the people of West Donegal and firmly establish ourselves as a giant of Donegal football again.