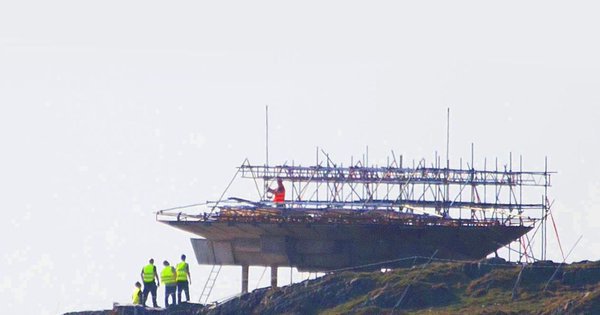 written by Stephen Maguire May 13, 2016
Facebook0Tweet0LinkedIn0Print0

The scene at Malin Head where an alleged Millennium Falcon shop has been built! Pic by Northwest Newspix.

A ring of steel has been thrown around the secret filming of Star Wars in Inishowen – including wi-fi blockers to ensure that sky-high drones do not capture scenes from the blockbuster.

Thousands of tourists have been clogging up the roads to Ireland’s most northerly point at Malin Head where the scenes are being filmed.

But film-makers are taking no chances that the scenes will be leaked onto the internet.

As well as dozens of security guards from a Dublin-based security firm, film bosses have brought in a wi-fi blocker to ensure drones cannot be used in the hills around Co Donegal.

The Irish Aviation Authority has also banned any flights or drones from using the airspace around Malin Head from yesterday until next Monday, May 16th.

Filming on the project will start today (FRI) and last until at least Sunday.

Donegal County Council have issued a notice of roads closure around Malin Head which will last until Monday next.

Nobody will be allowed to drive through these roads apart from the film’s crew.

It is still not known which of the blockbuster’s stars will arrive in Co Donegal for the filming.

Leaked pictures from the set appear to show a Millennium Falcon spaceship but others claim this is merely a platform for stunts.

A massive zip-wire and water tunnel has ben erected on the landscape.

Jim Mullin of Malin Head Community Association said the arrival of the Star Wars crew has brought a new dimension to the normally remote area.

“In the last few weeks, it’s incredible, the amount of traffic on the road coming here, up to the most northerly point in Ireland, just to see where it’s being made.

“We can only imagine what it will be like once they start filming here.”