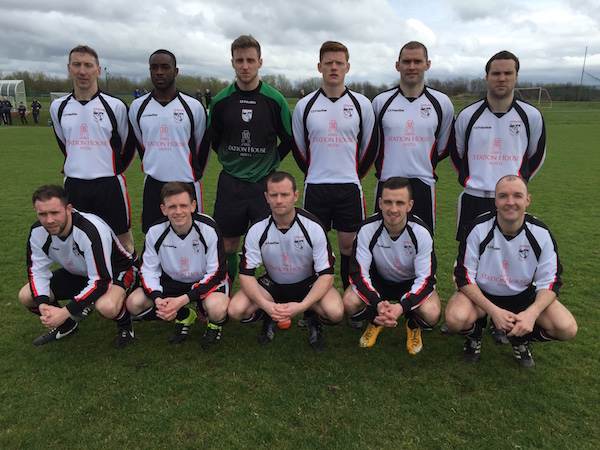 GALLANT ROVERS EXPOSED BY GULF IN CLASS AT AVIVA STADIUM

written by Stephen Maguire May 15, 2016
FacebookTweetLinkedInPrint

A terrific traveling support wasn’t enough to whip Letterkenny Rovers into a frenzy as their FAI Intermediate Cup dreams evaporated before their eyes at the Aviva Stadium.

Three coach-loads of fans as well as an army of private cars left Donegal in the hope of seeing Rovers beat champions Crumlin Utd.

But goodwill alone wasn’t enough as the Dublin outfit showed why they are one of the best teams about with a comprehensive 5-0 win.

Eamon McConigley’s team held their own for the first ten minutes but Crumlin began to find defensive cracks all too easy in the Rovers rearguard.

It was a stunning hat-trick from Greg Moorehouse, two in the first 18 minutes, which unhinged Rovers and left them chasing their tails throughout.

Moorhouse’s third and United’s fifth came from a cheeky back-heel in the dying minutes which summed up a final to forget for Rovers.

With Darren McElwaine operating seemingly as a lone striker, ‘Macca’ proved easy fodder for the Dublin side’s big defence throughout.

Paul McVeigh tried to raid down the right flank but was left isolated while David Shovlin faded despite an energetic first half.

The midfield partnership of Mark Forker and Christy Conaghan came up against a United midfield which allowed them little time on the ball.

At the other end, although Paul ‘Yank’ Boyle and Shane Bradley put in big shifts, Utd pounced on any shortcomings.

Rovers ‘keeper Rory Kelly couldn’t be faulted for any of the goals and but for a number of fine saves, the Donegal outfit could have ended the 90 minutes on the wrong end of a heavier defeat.

The traveling Letterkenny support did their team proud with a fine display of sportsmanship as they clapped their beaten team off and stayed to congratulate what was a better opposition on most parts of the park.

McConigley will have to help his team put this heavy defeat behind them as they prepare to face Athlone next weekend in the FAI senior cup.