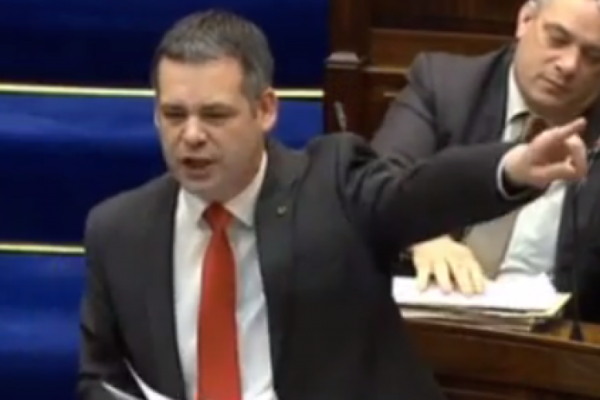 NOW GOVERNMENT DOESN’T KNOW HOW MUCH IT PLANS TO SPEND, SAYS DOHERTY

written by John2 May 26, 2016
Facebook0Tweet0LinkedIn0Print0

From non-answers to no answers at all, Ministers can’t say how much Programme for Government will cost – Pearse Doherty TD

DONEGAL TD Pearse Doherty has said government accountability to the Dáil now seems to mean getting no answers at all as opposed to last government’s non answers.

The Deputy submitted a question to each of the 16 government departments about how much the commitments relevant to their Departments contained in the Programme for Government will cost.

Deputy Doherty: “I was surprised to find that of the questions I submitted to each Department, only one Department has replied.

“The question I posed was a simple one, ‘how much are those things you say you are going to do cost?’ What would appear to be a straight forward query from an opposition TD. Only one Department, Public Expenditure and Reform (PER) replied, but with no detail whatsoever. In fact, the reply reads like a press release.

“When I questioned why I had received no reply at all from the other 15 Departments, I was told they had all transferred the question to PER. That is a shockingly arrogant attitude and disrespectful to those who voted for me to hold this government to account.

“The lack of replies actually reveals the real answer; that the government has no idea how much the Programme for Government policies will cost. We spent much of the election campaign discussing the Fiscal Space and the accuracy of parties’ manifestoes. Now we have a government which can’t stand over a single figure in its own manifesto.

“There has been much talk of the new Dáil being empowered and I intend to test that to the limit by demanding that Ministers answer the straight forward questions put by TDs. Political reform cannot mean that the non-answers of the last government are replaced with no answers at all.

To ask (all Ministers) with regard to each commitment relevant to their Department in the Programme for Government to provide the full anticipated cost for each measure and to show clearly in a table how each measure is financed i.e. whether it is already committed spending, additional new spending to be taken from the fiscal space, EU funding etc. and to make a statement on the matter.

The Programme for a Partnership Government sets out the ambition to build a strong economy and to deliver a fair society so that communities thrive throughout both urban and rural Ireland.  For each of the policy challenges contained in the Government’s Programme a clear unambiguous high-level ambition is also identified, for example:-

– reducing waiting times in the health sector; and

As stated in the Programme for every policy challenge, the new Government will ensure that a balance is struck between addressing urgent priorities – utilising the action plan framework set out in the Programme document – and engaging in long-term planning and thinking, so that lasting solutions with broad based support are implemented.

In order to adopt this approach in practice, a key action for the Government’s first hundred days is securing agreement with the Oireachtas on putting in place a reformed budget process.  This is intended to secure a significantly more participatory approach, underpinned by a substantially enhanced Dáil input into and feedback on the development of budgetary priorities.

It is envisaged that an important element of this new model will be to facilitate appropriate consultation and engagement on the costings of specific measures intended to respond to particular Programme for Government priorities, as well as examining how these measures align with overall fiscal parameters.

This new approach will have a central role to play in guiding and informing deliberation by the Oireachtas on budgetary options and in shaping the Government’s budgetary proposals in due course. These proposals would then form the basis for setting out the proposed Departmental expenditure ceilings required to accommodate the specific measures to deliver the Programme for Government priorities. At that point in time, the fiscal space implications of changes in Departmental expenditure arising from these specific measures can be fully assessed.

NOW GOVERNMENT DOESN’T KNOW HOW MUCH IT PLANS TO SPEND, SAYS DOHERTY was last modified: May 26th, 2016 by John2
Facebook0Tweet0LinkedIn0Print0