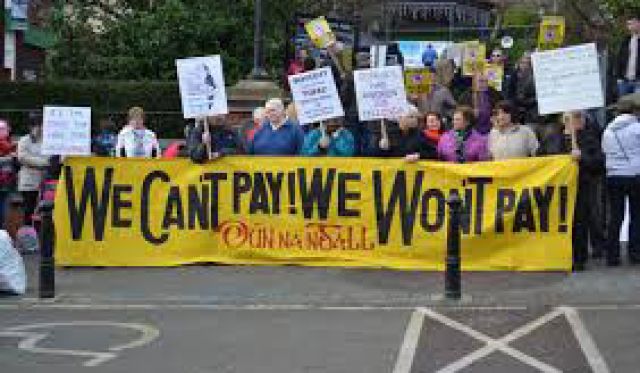 POLITICS: Can’t Pay Won’t Pay have said that the reaction to the European Commission’s clarification on our exemption from water charges, shows that there is no place for complacency from the anti-charges campaign.

The issue of the exemption and the campaign’s response will be discussed at a public meeting tomorrow night (Thursday 8pm) in the Mount Errigal Hotel in Letterkenny which will be addressed by Paul Murphy TD and Thomas Pringle TD.

Spokesperson Micheál Choilm Mac Giolla Easbuig told Donegal Daily, “There has been a lot of talk that the introduction of water charges in 2010 amounts to an ‘established practice’ of charging for water, but this is total nonsense.

“Irish Water did not even exist until 2014. Billing only began on 1st January 2015. We have had billing for little over a year. The money collected cannot in any way be considered ‘recovery of costs’ – it has not even covered the costs of the billing!

“Add to that the set up costs, the consultants fees, the ‘conservation’ grant and the metering and we can see that the expensive fiasco that has been Irish Water has cost far more than anything that was collected.”

“The truth is that the European Commission did not mention 2010, nor Ireland, nor give an opinion on whether or not we still have an exemption from the Water Framework Directive.

“But what they did say has been talked up and distorted by those who wish to see a future reintroduction of the charges by telling us that we have no choice, that Europe is demanding it.”

“At the end of the day, it really doesn’t matter what politicians or the European Commission say. If we don’t accept being made to pay twice. If we refuse to pay, there won’t be charging.

“There is no room for complacency. We must keep the campaign going and we appeal to the public to come to the meeting tomorrow night to hear how we can ensure that water charges never return.”