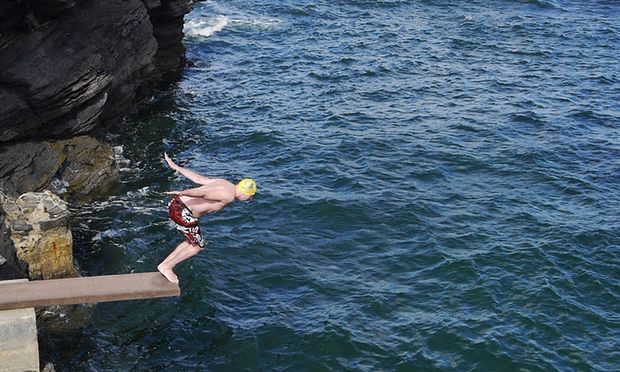 FEATURES: Two stunning Donegal swimming spots have been named among the top ten in Ireland.

Fort Dunree in Buncrana and Rougey Rocks were named in a list of the Top Ten swimming locations in Ireland.

The swimming locations are in a new novel called At Swim: Book About the Sea, by Brendan Mac Evilly with Michael O’Reilly.

The pair set off this time last year, and went on a tour of the Irish coast for their book, At Swim: A Book about the Sea, which lists the best places to swim around the country, and explores Ireland’s sea swimming culture.

Rougey Rocks: Just north of Bundoran is a cliff walk to a pair of sea stacks. They lean out over a narrow, deep inlet, making perfect diving platforms. Generations of teenagers have gathered here in summer to test their nerve by jumping from ever-higher ledges.

It’s also got one of the last remaining springboards in Ireland, most were pulled up by councils frightened of litigation. But here, the board appears to be safer than the sea stacks.

Fort Dunree: The last place on our coastal odyssey is known more for its history than its swimming heritage. A small pier sits directly below an 18th-century fort in Lough Swilly.

It’s where the Earls of Tyrone and Tyrconnell fled in 1607, where the French fleet carrying the revolutionary Wolfe Tone was intercepted and defeated by the British in 1798, and was the largest home of the Royal Navy’s Grand Fleet in the first world war.

But its swimming value is beyond doubt too. The pier is plenty deep for diving, with access to a narrow gully beneath the drawbridge and a pristine, horse-shoe beach on the opposite side of the fort.