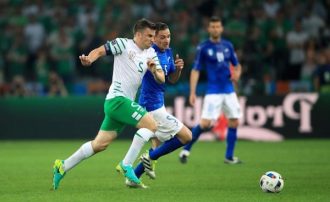 EURO 2016 JOY: ‘I TOLD THE LADS TO MAKE THEMSELVES HEROES’ – CAPTAIN COLEMAN 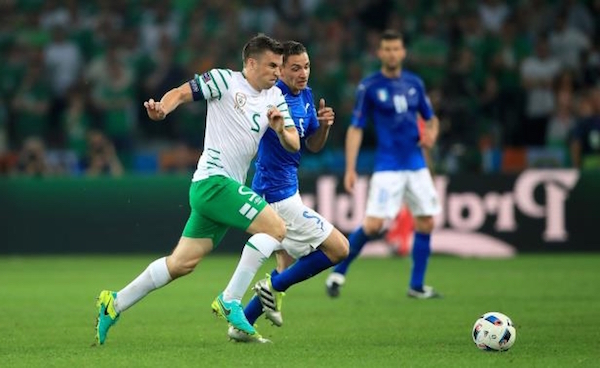 Seamus Coleman leads by example against the Italians.

Donegal soccer legend Seamus Coleman has revealed how he told his players to make themselves heroes as they took on Italy in the make-or-break Euro 2016 game last night.

The modest Killybegs man was made captain by manager Martin O’Neill.

And Seamie wrote another chapter in Donegal and Irish soccer folklore by helping his team step up to the plate.

He said “I said to the lads before the game, ‘Let’s make ourselves heroes, there’s no reason why we can’t’ and we did that tonight.

“I think the Belgium game was so important because we realised how poor we were and you could see from the off we wanted to play ball.

“We know we’re good at keeping the ball. Against Belgium we didn’t do it. Tonight we did and we fully deserved that win.”

Seamie admitted it was difficult to put into words what he was describing.

But he said he knew himself and his team-mates simply had to do it for the fans.

“It will be a game that will be remembered for a long time,” he told RTÉ Sport.

“We fully deserved that win and our fans are so, so special.

“We didn’t want to be the team that goes home and everyone to talk about how good your fans are but the team are gone.

“We wanted to give them something to celebrate.”

Coleman, who was making his 36th appearance, paid tribute to his family including his father on a night which saw fans at home and in France relish the atmosphere of getting out of the group stages.

He said “Personally, to captain your country is something you dream of and to do it at a stage like this makes all them trips over and back to Sligo with my dad worth it,” he said.

The Killybegs native was keen to acknowledge all the support he has received along the way and says it is a big motivating factor every time he takes to the pitch in a green jersey.

“I’m out to do them proud. Let’s hope now against France we’re not finished. We’re going to enjoy tonight, delighted to get through, but this group of lads have big results in them.”