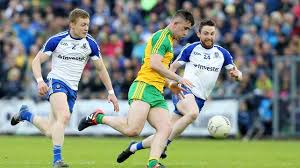 AGONY FOR DONEGAL AS LATE FREE FROM MCMANUS FORCES REPLAY IN THRILLING CLASH!

ULSTER SFC SEMI-FINAL: So, so close! Donegal were just seconds away from a sixth Ulster SFC final in-a-row, but Conor McManus denied them with two late, late frees in injury-time.

In what was undoubtedly the clash of the All-Ireland Championship so far, Donegal looked like they had done enough, but it wasn’t to be and the two sides with have to do it all over again.

Michael Murphy missed three frees on the trot, while Patrick McBrearty was also guilty of posting some poor wide’s.

However, when Odhran Mac Niallais netted midway through the second-half, it looked like that could be the crucial score.

But Monaghan would not be denied – that man Conor McManus is a class act, and when they needed him most, he delivered.

In a close first half, Donegal registered three points from play through Murphy, McBrearty and Lacey.

McBrearty added two from placed balls and Murphy also nudged over a free.

Conor McManus was excellent from dead balls from Monaghan, and neither side could be separated.

In the second-half, MOTM Karl O’Connell scored some huge points, and a combination of poor shooting resulted in Monaghan leading by three points.

Donegal got it back to two points, and then Mac Niallais scored another classy, classy goal.

Donegal then went two ahead through the brilliant Eoin McHugh and as the game ticked into injury-time, they had one foot in the final.

However, six minutes of additional time were added, and two scores from McManus levelled the game.

The drama wasn’t over though, Donegal broke at pace, and substitute Christy Toye fired over, and that looked like the winner.

However, Monaghan weren’t going to relinquish their Ulster SFC title, and after McManus was fouled, he scored the resulting free to force a replay.