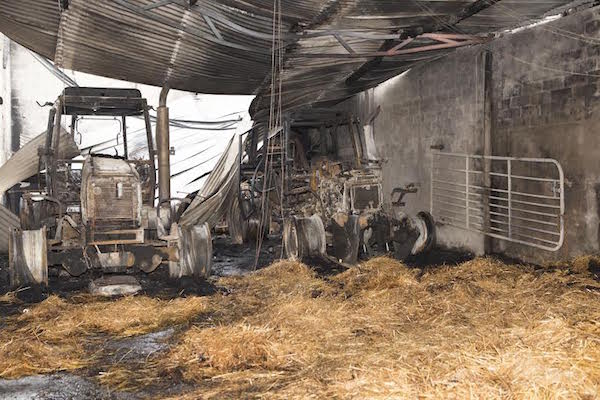 Tractors were destroyed in the attack

GARDAÍ in Donegal have confirmed they are investigating an arson attack on a family farm which caused up to half a million euro worth of damage.

The Dooher family farm just outside Lifford was targeted just before midnight on Monday, gardaí say.

It’s understood petrol bombs may have been used in the vicious attack on farm buildings which destroyed them and ruined two tractors, a bailer, a mower and other equipment.

The first crop of silage from the 500-acre farm was also destroyed.

All the buildings will have to be replaced.

Forensic experts have spent the past two days examining the scene of the incident, which is one of the worst attacks of its kind in the county.

But he has praised local farmers and a tractor dealer who have provided him with equipment so he can continue to work on his grain and beef cattle farm.

“The support of local people has been incredible,” said Mr Dooher.

“This has been a terrible experience for me and my family and the support of other people has been incredible.”