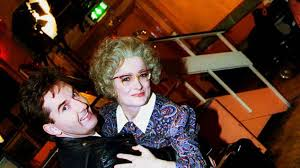 Daniel O’Donnell pictured with the late Caroline Aherne in 1999.

Daniel O’Donnell has paid tribute to the late actress and comedian Caroline Aherne – who passed away last weekend after a lengthy battle with cancer.

Aherne, who died aged just 52, wrote and starred in the much loved BBC sitcom, The Royle Family, and was also narrator in the popular reality TV show Gogglebox.

However, it was in her role as Mrs Merton that resulted in the talented actress collaborating with our Country music icon Daniel O’Donnell.

In 1996, Daniel was guest on her hit TV show Mrs Merton, and later in 1999 the pair starred in a video for his Christmas single ‘A Christmas Kiss’.

O’Donnell revealed that Aherne, whose grandparents hailed from Galway, had warned the actress to be nice to him when he appeared on her show.

In his weekly column with The Sunday World, O’Donnell wrote, “I was shocked and saddened last week to learn of the death of Caroline Aherne.

“While I was aware she had cancer, I didn’t know she was so ill, so it came as a big shock to me.

“Although we weren’t close friends, I knew Caroline and I was very fond of her.

“My fans were telling me not to go on the Mrs Merton show, saying she’d make mince meat of me, but we had great fun.

“Her granny also warned her to be nice to me!

“We also had such a laugh when she starred in my video for the song ‘A Christmas Kiss’.

“She was a great actress and I loved The Royle Family, while she also made Gogglebox even funnier with her hilarious narration.

“Caroline will be missed by everyone, but especially those closet to her.”