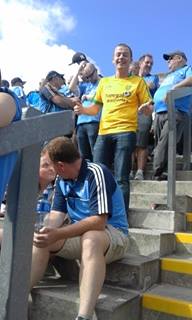 Donegal GAA fan Brian Gillespie from Crolly had a better day than most Donegal fans on Sunday – despite sleeping in for the big game in Clones.

Brian like most was excited for the Ulster final clash between Donegal and Tyrone.

He stayed at the famous Copper Face Jacks on Saturday night and he also made an appearance in the nightclub were he only managed to get two hours sleep and was awoken at 12.30.

Brian revealed “I jumped into the car and drove but I quickly realised that I would just be walking in to Clones when the match would be over.”

After realising Brian decided to head for Quinn’s pub in Drumcondra.

Once he walked into Quinn’s there was a comedian on stage and with Brian wearing the green and yellow of Donegal, let’s say the welcoming wasn’t as polite as normal.

Brian went outside and handed his four Ulster final tickets to the Gardai.

With Dublin taking on Westmeath at 4pm that day the Gardai started laughing and felt sorry for Brian and they gave him two hill 16 tickets for himself and his better half.

Hill 16 is famous for Dublin supporters making it a sea of blue on game day and Sunday’s final was no different except for a drop of yellow.

The whole hill erupted into a chant – “Hill 16 is Dublin only.”

“To be honest I still probably had a far better day than any other Donegal fan in the country.” Brian told Donegal Daily