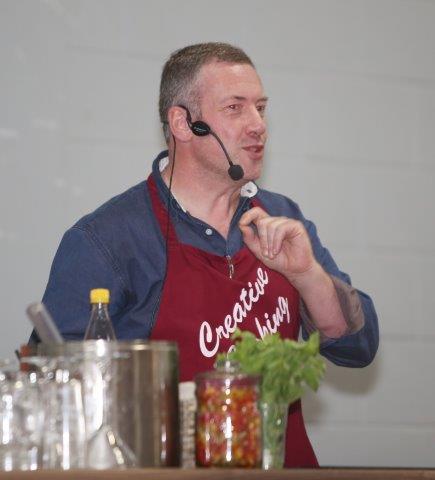 DD Cooking: So Hungry He Could Eat A Horse!

I’m so hungry I could eat a horse !

Well not literally eat a horse although some of us may have on occasion eaten horse meat without knowing it but I think that’s been sorted out!

When I lived in Paris during my training I did dine in a restaurant that served horse meat.

And I will admit to eating a medium rare horse meat burger with the soft fried egg on top , served in a toasted brioche bun , Bernaise sauce and pomme fritte (chips ) on the side , it was absolutely fantastic , I never tasted meat like it in my life , it was like venison , juicy with a unique flavour.

We don’t see much of that here , a wild boar or kangaroo burger if you’re lucky. My next venture perhaps! Just kidding, I actually don’t eat a lot of meat now more fish and vegetables & the odd pecan traybake from Café Banda!

I don’t watch much television either but when I do I like to watch adventure or survival programs.

Channel 4 has a series on at the moment called Eden , where 23 people ( one of them a Chef ) are on a 600 acre estate for a year and they have to survive growing their own vegetables rearing their own animals with no electricity , Internet access or modern facilities . No Wi-Fi imagine that will be a tight one !

In the second episode of the show they had to kill one of the animals for food after eating potato porridge and pearl barley for nearly 3 weeks. I was amazed at how upset some of the people were when the animal was killed – where do they think it comes from?

The truth is there is only one way to get meat , you have to kill the animal and although it is upsetting for some I think that a lot of you think it comes in plastic trays wrapped in cling film .

I’ll admit we sell a serious amount of meat & chicken in Sonder , virtually every main course has meat as the main protein , we do have several vegetarian and vegan options but meat is the one ye all love …….why ?

Well protein of course we all love protein in some shape or form be it meat , chicken , fish or if you are a vegan beans , soya or quinoa .

Protein helps build muscle , it burns fat, it staves off the hunger and we feel full after eating a big slab of meat or chicken.

I know one vegan in particular reading this now and I’d say she’s screaming at the screen.

I often wonder if vegetarians or vegans are hungry all the time? If you know anybody with a vegan lifestyle maybe ask them I’m sure they’ll be delighted to discuss with you their fantastic healthy option.

Anyway back to the meat. I have a friends that keep their own rabbits & chickens for their own meals , nothing is wasted , the animals are well looked after , fed proper food , cared for if they are sick but ultimately they are humanely killed.

I think this is the one that puts people off. Even a tough nut like me would find it hard to watch an animal get slaughtered but that’s the way it is.

A 10 pack of chicken fillets is in reality 5 chickens ! 2 plump breasts per bird , there is no way around it that’s the way they were created .

So if you are a committed meat eater maybe you could make a conscious choice of finding out where your meat came from. Try a local craft butcher , visit a farmers market and meet the farmers that care for their animals before they meet their makers.

If not maybe consider a vegetarian or vegan lifestyle and see how it works out for you .
So this weeks recipe is for a fantastic vegan main course , it’s hot , it’s spicy and its full of flavour

I have a special request for a pork recipe so I’ll do that next week .

On a personal note we just passed our second month of opening Sonder and I’d like to thank everyone for their support so far. We are receiving rave reviews for our coffee , food & service , we work long hours and we all work hard to bring the best to you and we are delighted with the response so far.

The name Balti is from the cooking pot and is not in fact an Indian dish of origin.
The word originates it Tibet.
You may use all types of vegetables for this dish but I would suggest that you steam the harder vegetables first and then continue the recipe.
You will need.
500g of Okra, (ladies fingers) washed dried and trimmed.
450g of Fresh/ tinned chick peas.
2 tbls spoons of balti powder.
Coconut oil for cooking .
450g of tinned tomatoes.
2 tsp of Garlic& ginger paste.
1 medium Chopped onions
100g of Tomato puree.
Fresh coriander.
Method.
Soak and cook your chickpeas if using dried or drain the juice from the tin.
Slice your okra and set aside.
Heat a little coconut oil in your pan add your chopped onions, garlic and ginger.
Cook for a couple of minutes. Add your okra and cook again.
Add your balti powder to your along with the tomato puree.
Finally add the chickpeas and tinned tomatoes.
Cook until the okra is tender.
Serve with the and coriander on top.
Other vegetables for this dish would be cauliflower, brocholi, butternut squash, red onions, sweet potato, new potato or any fresh vegetable.

DD Cooking: So Hungry He Could Eat A Horse! was last modified: July 29th, 2016 by Martin Anderson