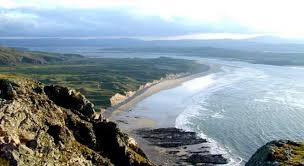 A Donegal art project is one of a number of projects to receive part of €800,000 grant announced by the Arts Council for a project called‘Making Great Art Work – Open Call.’

The Open Call event is an Arts Council initiative which funds ambitious, one-off artistic projects by some of Ireland’s best artists and arts organisations.

More than €800,000 in total has been awarded to seven projects this year.

The Donegal project is called LATITUDE by Marie Barrett.

This is a site-specific, visual arts project about identity within an era of shifting borders. It will be presented as a film and a series of temporary sculptural forms at Malin Head and other cross border territories where Lookout Posts are sited.

Among the other successful projects are a theatrical response to the housing crisis, an international arts festival for children aged under 6 and plans to reinvigorate Dublin’s James Joyce Street to reflect its rich artistic heritage.

Speaking today, the Director of the Arts Council Orlaith McBride said “I am delighted to announce the seven successful projects for this year’s Making Great Art Work – Open Call awards. Collectively they represent the work of some of the most dynamic and interesting artists in Ireland. In their range and ambition they reaffirm the centrality of the arts and the importance of the voice of the artist in our country.”

“These projects address a number of important issues faced by individuals, communities and societies today from homelessness to the development of young children to the international movement of finance to borders and territories and the nature of our urban spaces.”

The priority for this year’s awards is for projects that are large in ambition, irrespective of physical, temporal, or quantitative scale and engage with the public as audience members or as participants.