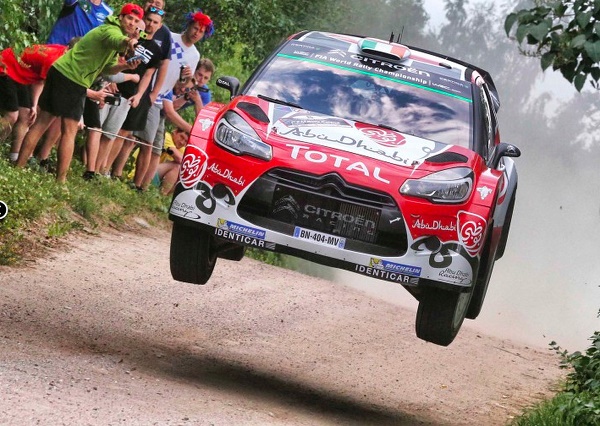 DD Motoring: A look back on Ireland’s great rallying achievements

“I will never fully come to terms with losing you, Ted. You were my right hand; You were my view to the road up ahead, your voice will always be in my ear when I put on my helmet, I will never forget you. You were the best, and no one will ever come close. I have to continue this dream for us both.” – Craig Breen

The words of Craig Breen this week remembering and missing his former navigator,the late Gareth Roberts who lost his life in a rally in Sicily. Four years on after the crews massive accident and Craig would like nothing more that to share his highest success in his rallying career this weekend with his team mate Gareth Roberts (TED).

Craig said, “I knew he was there with me in spirit.” 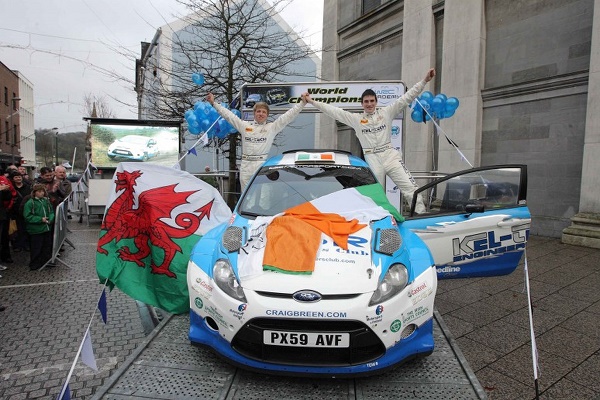 In a PC world that we now live in, you could say Craig’s interview at the end of the last stage, of the Rally of Finland, could have been better managed, but his team mate on his journey through his rallying career was the one he humbly and sorrowfully wanted to remember on that special day for Craig Breen.

The Waterford native and Circuit of Ireland winner had his best result to date by finishing on the podium at the weekend in a rally which is considered to be the best Rally in the world.

Two of the best

The kings of rallying were always the “flying fins,” Ari Vatanen being the one that landed here to Donegal in ’78 to win our event. The Finish rally drivers are considered to be the best rally drivers and are good no matter where they go in the world. They hold the record for the most home wins on the home event, winning it 53 times in it 60
year history, So this might give you an idea how special it was to have drivers from this island doing so well in Finland.

Craig Breen recorded his first ever podium finish in in world rally by finishing third. It’s the greatest result for Ireland on a normal day but last weekend was no ordinary weekend in rallying, Craig Breen was third over all and his team mate Kris Meeke won the rally outright. It’s the things dreams are made of.

As a young fellow growing up in Donegal, known that I would never be able to afford to go rallying I had to settle for a parallel life in my imagination. In the real world I had to settle for a battered up Ford Cortina Mk3 that my father owned. In the dream world we sanded down and painted the wheels, fitted spotlights, removed the air filter
to make the car look , feel and sound like something more special than it really was. Coming home from watching a rally and particularly the servicing I was always drawn to preparation and attention to detail that Sydney Meeke did to cars that he prepared .

I remember one particular Donegal rally in the service area of the Milford Mart, Sydney Meeke was looking after Vincent Bonner’s RS1800 , Sydney was the man that looked after that car since it left The Ford Works Factory Team where it was built originally for Russell Brookes as a wide track Monte Carlo Rally Spec car for the World Rallying
Championship. . I first seen this beautiful car on a very wet Galway International Rally in the hands of the great Bertie Fisher and Austin Frazer. A couple of years down the road and this works car was completely rebuilt for the ’83 Donegal Rally. Sydney Meeke had taken everything was was good about this world rally car and then made it “Donegal proof.” 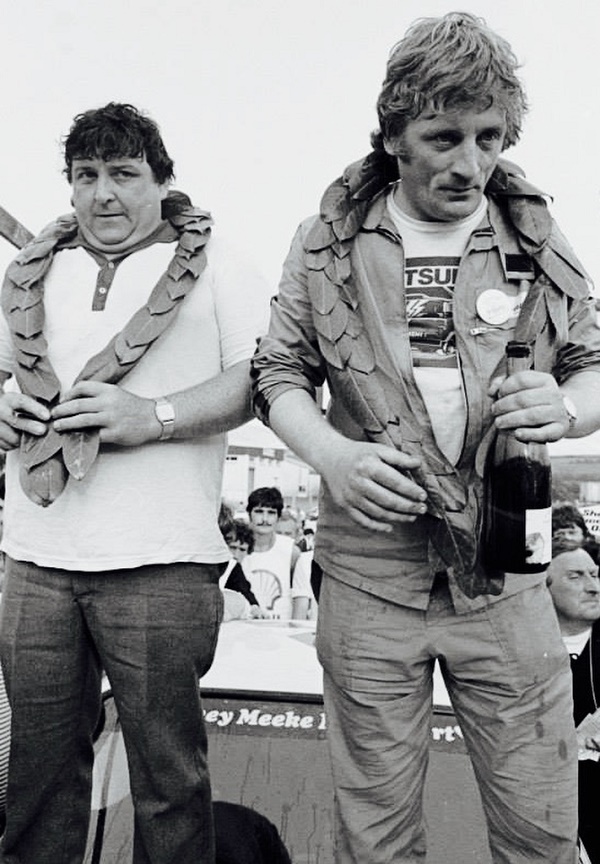 Meeks’s first Donegal local heroes Vincent Bonnar and Seamus Mc Gettigan celebrate the win on the on the bonnet of their Ford Escort in ’83. On the windscreen behind them Sydney Meeke, Kris Meeke’s fathers name is proudly on display,  it was also his first Donegal win as a rally car specialist.

Now it was sitting in the service area and Vincent Bonnar was looking for more power. We didn’t hear the conversation but the word on the “grape vine” that day was that Bonnar wanted the rev limiter that protected the engine removed. Vincent believed that he could take on the competition if he had a few more revolutions of that sweet sounding RS1800. Maybe Sydney Meeke always went to the Milford Inn for his dinner in them hazy days of the Donegal Rally. But that day we believed he was heading to Milford Inn to make a phone call to Italy to have a chat with Vincent’s brother and business partner known to all as the “Dude.” 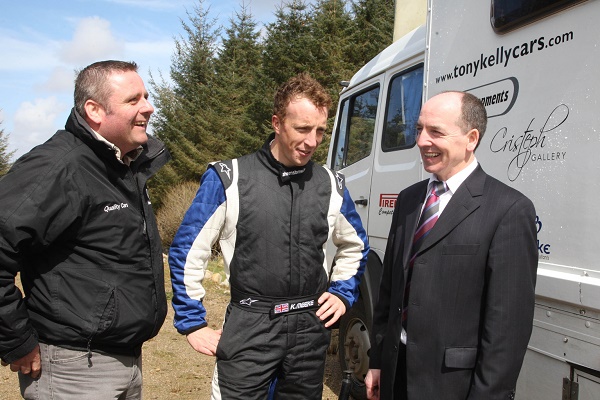 In the days before good mobile phones and good network service. Meek returned with a step a lot faster than he went up. The white smoke went up from Rome via the Milford Inn, as the Dude elected to go with his brother, Vincent’s wishes and take the limiter off. Meeke’s worry now for the rest of the weekend, was that the white smoke from Rome did not develop into a darker shade of blue of a blown engine and retirement. That summer Vincent Bonnar and Seamus Mc Gettigan went on to become the first winners of their home event and it also was Sydney Meeke Motorsports first overall victory on a Donegal International Rally.

Over the years we have watched the progress of Sydney’s son Kris through his career, his raw talent could have done with the odd “rev limiter” here and there, but like the late and great Colin McRea , who believed that one day Kris would be where he is now, winning world rallys’ , both of them knew that sweet spot between 9/10s and 11/10s that few of us will ever reach.

So many times the word would come through of Meeks’s high position on a World event to be followed by the disappearance of his name from the leader board. I have had this argument so many times wondering if he would not have been better trying to get home in 5th overall than going out of a rally.

At the high level that Kris Meeke was competing over the last decade he never could rest on a finishing position. He always was on the fringe of a team or on a team that may have been on the fringe of competition. 11/10’s was the only way for Meeke , “no limiter.”

At the end of Last year Meeke’s career hung on the negative side of hope. Kris re-modelled more works cars than his father Sydney ever did in his workshop in Dungannon, Citroen were losing the battle to VW who had developed the Polo which was winning rings round them. Citroen decided they were not going to contend the world championship this year but were going to work on the development of a new car for 2017. They were going to do a handful of rallies just to see how the developments of their car was coming along, And Meeke was the raw talent they needed to develop their car. 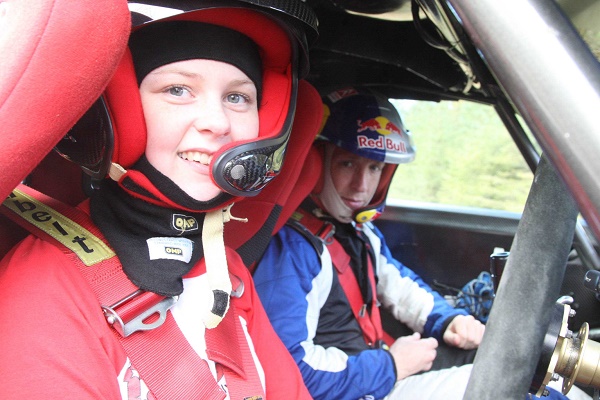 Toni Kelly with Kris Meeke on the notes as they set up Toni Honda Civic for the forthcoming Killarney Rally. Photo Brian McDaid

This reminds me of a yarn that was told about a farm near home now covered with a housing development. The farmers son was more interested in repairing the family tractor than doing any farming. They lived at the top of the hill and the son would freewheel the tractor out the barn door and down the hill minus a bonnet or exhaust and would kick start it on the hill, the old Fordson would fire up with a roar, or would end up getting a tow back to the shed. One day his mother was out feeding the hens and she seen a small aeroplane flying overhead. She continued to feed the hens never lifting her head and said, “would you just look where that son of ours is now.”

We are very proud of young Meeke, Flying so high in Finland this weekend. This development year by Citroen is to date the best year of Kris Meeke’s rallying career. He is still driving at 11/10’s as the times on the famous stages in Finland will tell. Kris and his co-driver Paul Nagle have done so well., “I had so much enjoyment competing on the rally, It was like driving a quad I drove around the fields at home as a boy growing up, dreaming of becoming a rally driver. Paul Nagle my navigator had to read the notes of every stage and get to the finish line before me to make our success an outright victory. Kris said.

He is to the future , wishing Kris Meeks and Craig Breen all the best in their future career.