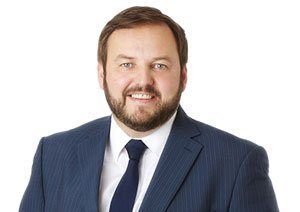 Pádraig MacLochlainn is a Sinn Féin politician who serves the Donegal North-East constituency. A busy man, Pádraig has acted as the Sinn Féin Spokesperson on Justice and Equality, Defence, and Foreign Affairs and Trade, and also served as Mayor of Buncrana not once, but twice, during the periods 2005/2006 and 2010/2011.

MacLochlainn has spoken out about a wide range of issues facing the people of Donegal today, and is a familiar face on national platforms such as ‘Tonight with Vincent Brown’. Prior to serving as a public representative, he was a community activist and campaigner, locally and nationally.

This is Pádraig’s Donegal…

(1) What is your favourite place in Donegal and why?
Grianán of Aileach. It’s such a special and spiritual place and central to the history of our people in Donegal and West Ulster.

(2) If you could change one thing about Donegal what would it be?
The weather. A little less rain and more sun shine thank you.

(3) Who is the one person in Donegal that you look up to and why?
I admire many people in the county but if I was forced to name just one, it would be my good friend, Carrigart man, Pat Doherty, the MP for West Tyrone and former Sinn Féin Vice President. Pat has been a remarkable leader of Irish Republicanism for decades. He played a central role in the peace process over the years and he is renowned for his wise counsel and calm and understated demeanour.

(4) Daniel O’Donnell or Packie Bonner?
Both men have done Donegal proud but I will plump for Daniel.

(5) What has been Donegal’s proudest moment in recent years?
Our Donegal All Ireland and Ulster winning football teams. They have made huge personal sacrifices and lifted our people’s spirits through difficult economic times.

(6) What was Donegal’s saddest moment?
The saddest moment in recent times was the tragedy and deaths at Buncrana Pier. Truly heartbreaking.

(7) What is your favourite Donegal-made product?
Donegal Creameries milk

(8) Who is Donegal’s greatest ambassador around the world and why?
Daniel O’ Donnell is a great ambassador for the people of Donegal and another man, also proud of his Donegal mother and who never fails to promote the county, Martin McGuinness, Joint First Minister in the Six Counties.

(9) Who is Donegal’s most successful businessperson in your opinion?
My favourite person in business in Donegal has to be Pat Doherty and his family who have developed the fantastic tourism centre over the years that is the Doagh Famine Village in Inishowen without any grant assistance. Just inspiration and really hard work.

(10) Who is your favourite Donegal sportsperson of all time?
Tony Boyle, member of the All Ireland winning team of 1992. He was a mighty footballer and so exciting to watch in full flow.

(11) What is your favourite Donegal restaurant?
Harry’s in Bridgend. Top food, showing off our local Donegal produce. The Ubiquitous in Buncrana is a favourite of mine too.

(13) What is your favourite Donegal saying or expression?
“Hup Donegal”, thanks to our footballing heroes.

(14) What is the biggest challenge facing the people of Donegal today?
Brexit has been a serious setback after years of efforts to breakdown the impact of the border and partition on our people in this county and region. We cannot go backwards following this referendum result. We need to stand together and fight together to protect the interests of Donegal, the 6 Counties and the island of Ireland.

(15) What is your favourite Donegal food?
Most things on Harry’s or the Ubiq menu

(16) Is there anything that really annoys you about Donegal or its people?
I like to focus on the positives and that’s easy when it comes to the great people of my county.

(17) Do you have a favourite local band?
Altan are wonderful ambassadors for our native music and language.

(18) What inspired you to pursue a career in politics?
My late father, Reamonn was a political prisoner and he died when I was just 12 years old. He inspires me always.

(19) If you have a million euro to improve something in Donegal what would it be?
Donegal will need tens of millions of euro in investment and more to reverse the years of neglect. We need to continue to demand equality of access in terms of investment in our public services; health, education and Donegal County Council’s services, our roads network and God forbid, a rail link some day.

(20) Is there anything about Donegal that you are very proud of?
The people. For all its unrivalled natural beauty, this county would be nothing without its people.