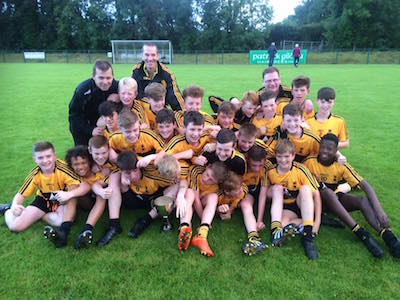 UNDERDOGS St Eunan’s tore up the script to retain their County A U14 title with a stunning win over red-hot favourites Termon in Convoy last night.

The Termon lads went into the game having defeated all before them this year.

But if there was a script for this clash, the St Eunan’s hadn’t read it.

Expertly coached by Danny O’Donnell, Declan O’Donnell and Anthony Farren, the black and amber boys completely controlled the first half, so much so that when Termon pointed for the first time in the 27th minute, it was their first real attempt on target.

Eunan’s led 1-05 to 0-03 at the break, Tony Callaghan slotting past Emmet Maguire for the goal.

The pattern continued in the second half with the St Eunan’s lads showing real determination and focus to deliver a near perfect performance and running out as convincing winners.

Caolan Collier and Lorcan O’Donnell got the Letterkenny side’s second half goals.

Although Termon also found the net through Mark Gallagher and Conor Black, the latter’s superb finish was merely a consolation for the Termon supporters.

The quality and style of football played by St Eunan’s in particular was a joy to watch and provided great entertainment for both sets of supporters.

The final scoreline was 3-11 to 2-8 but the gap could have been bigger as the St. Eunan’s lads controlled possession for the majority of the game.