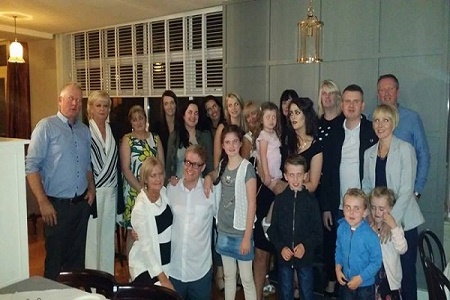 EXCLUSIVE: A 27 year search for a missing Donegal man has ended in bitter-sweet happiness for a young student.

After Glen grew up in foster care, Glen and Linda both tried to trace back his family roots.

Glen Jankowski and his mother Linda have been searching for his father for over two decades but to no avail.

And by a remarkable twist of fate, Glen’s long-lost family in Co Donegal were also searching for him during that time.

Linda recently contacted Donegal Daily in what she said was probably her last gasp chance of ever finding out what happened to the man whose son she had given birth to.

And after just a few short hours of publishing the article, a lady from Carrigart contacted us saying she knew that Glen was her nephew.

Out of respect, we had never published the name of the man whom Linda and Glen knew was Glen’s biological father.

But amazingly Carrigart woman Catherine McBride named her brother and also said that Glen and he bore a striking resemblance.

We put Catherine and Linda in touch and last weekend, Glen met his Donegal family for the first time.

Unfortunately, it was discovered that Glen’s father passed away over twenty years ago.

We withheld the father’s name during our initial appeal as it was such a sensitive matter, but we can now reveal that the Glen’s father was named Martin Anthony McBride.

During our appeal, the only information Linda had on Glen’s father is that he would now be aged approximately 48 to 50, had mousy blonde hair, was 6 foot tall, and was originally from Donegal.

As it was a short term relationship she did not know many details about him, such as what area of Donegal he was from.

However, Catherine said that Glen is the spitting-image of her brother and the recognition was undeniable.

Catherine had actually been in London in 1989 with Martin, and Catherine had a child in England when Glen was approximately six months old, making the first cousins the same age.

When Martin’s relationship with Linda ended, he moved to Leeds. This is where the two families lost touch.

Catherine explained that she had never met Linda and didn’t have a second name for her, which made it difficult to trace Glen.

Catherine described how her family have been searching for Glen for more than twenty years. She remarked that it seemed as though divine intervention was at play as Martin died at 27, Glen is currently 27, and Glen contacted her on the 27th (of July). Glen was also born in the same month that Martin passed.

He now has 21 cousins to get to know.

Glen has lots of family members to get to know!

Martin’s other sister from the USA travelled to London and went through the archives to try and find their nephew, armed with only an approximate birth date and a first name.

Both families searched for each other to no avail until Catherine spotted our article.

Glen was absolutely delighted when we contacted him to let him know that his aunt reached out to us.

He said; “It is really surreal to suddenly have 21 cousins and 9 aunts and uncles in a place where I’ve never even been. Everyone seems really lovely though and I’m genuinely touched at how many people tried to find me. The whole of last week was surreal; on Tuesday the 27 year search for my father’s side of the family ended, on Thursday I graduated from university, and Saturday I had my 27th birthday. Now I’m going to Ireland. It’s like a bizarre film.”

“This is more progress than we’ve ever made before… I’ve found out so much in such a short piece of time. And this came from the article. I have a lot to process. My birth dad died in 1993. But otherwise it’s lovely news and i’m looking forward to getting to know that side.”

Glen’s grandparents has been desperate to meet her grandson, but unfortunately they passed away within six weeks of each other last August.

After spending several hours on the phone, Catherine has organised for Glen to come to Donegal and attend his grandparents’ anniversary mass.

And after 27 years of searching for each other, they now have the rest of their lives to catch up.