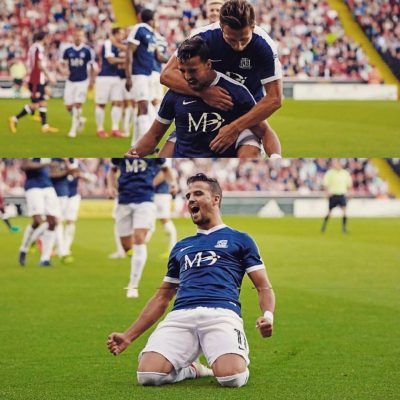 Former Finn Harps and Derry City midfielder Stephen McLaughlin is ‘buzzing’ after he netted his side’s opener as they earned their first win of the season.

McLaughlin has scored three goals for Southend United in League and Cup competitions since the start of the season, but his goal tonight helped pave the way for their first win.

The Clonmany man opened the scoring on thirteen minutes, as Southend earned a comprehensive 3-0 win over Sheffield United.

McLaughlin has enjoyed a sensational start to the new season, and looks as if he has put his injury concerns behind him.

He revealed his delight via social media, McLaughlin posted, “Buzzing to get on the score sheet tonight again!! #shrimpers #3points ⚽️🔥🔥

McLaughlin ‘buzzing’ as he nets opener in Southend’s first win of the season was last modified: August 16th, 2016 by Mark Forker