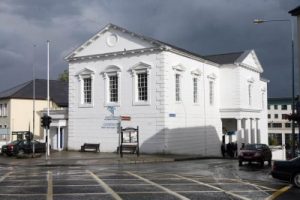 Farmer hospitalised after being attacked by trespasser this morning

COURTS: A Donegal farmer had to be hospitalised after being attacked by a man who trespassed onto his lands.

Jack McGlinchey, 19, has been remanded in custody after allegedly being involved in a serious assault – which caused one man to receive five stitches.

The alleged assault occurred at Golrum, Termon earlier this morning.

The defendant had parked on the land of local farmer John Duffy, and was effectively trespassing when an altercation ensued.

The court heard how Mr Duffy was hospitalised following the incident and required five stitches.

Garda Sinead McHale, stationed at Milford Garda Station, arrested the defendant this morning at 10.53am.

She found him sleeping in his vehicle a short distance from where the incident had occurred.

The court were also told that when Garda McHale read out the charges to the defendant he responded ‘No’ to all charges.

Inspector Goretti Sheridan informed the court that the state was objecting to bail due to the ‘seriousness of the charges.’

Inspector Sheridan said, “We’re objecting to the bail application due to the seriousness of the charges, and that the defendant has an address in Derry.

“We’d class him as a risk due to the seriousness of the charges before the court, and he has no address or connection to Donegal.”

Solicitor for the defendant Patsy Gallagher told the court that his client jumped into his car and headed to Donegal due to a family incident at home.

However, he stated his client wasn’t a risk, and that he was willingly to sign on as part of the bail conditions.

Mr Gallagher told the court, “My client had a family incident at home, and decided to jump in his car to get away from it.

“He headed towards Donegal and was driving around, when he became involved in this incident.

“He has instructed me that he will attend any future court appearances – and is willing to sign on at either Burnfoot or Buncrana Garda Station.

“He works part-time in a Café in Magherafelt, and earns around £150 per-week.

“He has never had bench warrants against him before, so there’s no past history that would suggest he’s a risk.

Inspector Goretti Sheridan requested that €1,000 be the fee for his bail, which she deemed ‘not excessive’ considering the seriousness of the charges.

Judge Alan Mitchell told the defendant that if the money isn’t put forward, he would be sent to Castlerea Prison – where he will appear in court next Thursday via video link.

If the bail conditions are met, he will be granted bail and will appear at Letterkenny District Court next Thursday.